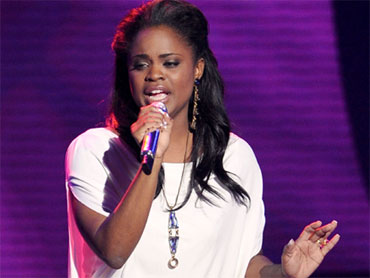 The odds weren't in Paige Miles' favor on "American Idol."

The 24-year-old preschool teacher from Houston was the second finalist eliminated from the ninth season of the Fox singing competition Wednesday.

Miles, who warbled through her rendition of Mariah Carey's "Against All Odds" on Tuesday's performance show, received the fewest viewer votes and was not rescued by the show's judges at the last minute.

"I lost myself in the song," Miles confessed earlier in the show.

Joining her in the bottom three were 20-year-old college student Tim Urban of Duncansville, Texas, and 17-year-old high school student Katie Stevens of Middlebury, Conn. Stevens was lauded for her take on Fergie's "Big Girls Don't Cry." while Urban was mocked for sliding across the "Idol" stage during his performance of Queen's "Crazy Little Thing Called Love."

"I thought the knee slide was awesome," gushed Miley Cyrus, who mentored the singers.

The singers who survivied Wendesday's cut and made the season's top 10 secured spots on the "Idol" summer concert tour.

Wednesday's episode also brought performances from Miley Cyrus and dating teen stars Joe Jonas and Demi Lovato. Cyrus sang her new single, "When I Look at You," and Jonas and Lovato sang their duet, "Make a Wave." The idols also sang a rendition of Wham's "Wake Me Up Before You Go-Go" for a group performance.

R&B star Usher will mentor the top 10 finalists for next week's competition.