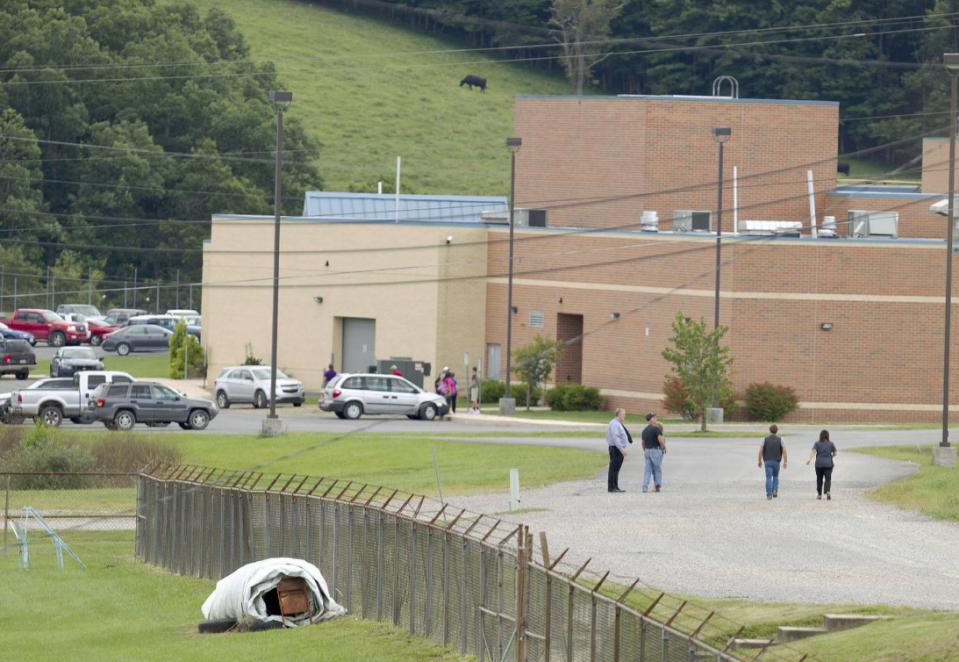 "I knew if I lost my composure, this is going to end badly," Smith told The Associated Press in an interview Thursday. "He told me I was going to die today and I believed that."

That the hostage crisis ended with no one killed or even hurt at Philip Barbour High School is largely due to Smith, whose superintendent called her actions "miraculous."

The hostage-taking drama rocked the school on the ninth day of the school year in the small Appalachian town of Philippi, home to about 3,000 people some 115 miles south of Pittsburgh, Pennsylvania.

Authorities have not released the name of the boy, who is being held in a detention center and faces multiple charges.

Smith said he showed up armed in her classroom around 12:45 p.m. He had been one of her students for eight days, but he was in a different class. Smith said she thought the boy had issues with a girl he was seeing in the class that he took hostage.

"He said his life was messed up and things were going to end," she recalled.

He told Smith to cover the windows, lock the door and throw the keys and her 27 students' cellphones on the floor.

For about 45 minutes, Smith said no one else knew that she and her 27 students were hostages. She diverted his attention from other students and tried to keep him talking while she walked around the room with him, sometimes relating to the troubled child with her own personal losses.

He pointed his pistol around the room and peppered the teacher and the class with questions.

He asked several students questions, saying if they told the truth or the right answer, they would be fine, and if not they would die, said Barbour County Schools Superintendent Jeffrey Woofter.

Smith said her students answered the boy's questions as well as they could, and stopped crying when Smith told them they had to.

"My students that were in here with me, I have never witnessed that kind of bravery before," Smith said.

She unsuccessfully asked the boy to put his gun in a drawer and talk things out.

Her best option, she thought, would come when classes changed at 1:22 p.m. The teen told Smith to bring the next group of students into the room and line them up, but she told him that was not an option. She finally convinced him to return her keys.

"I wanted to keep everybody safe and that includes him. I could see he was suffering," Smith said.

With the armed boy behind her, Smith opened the door and sent the next group of students the other direction. She also made brief eye contact with another teacher.

Recognizing something was wrong, the teacher approached Smith's classroom door. The boy pointed his gun at her head but the teacher was able to slip away to alert school administrators, Smith said. The boy became agitated when the loudspeaker blared that the school was on lockdown.

Within about 20 minutes, administrators and police arrived behind the locked door, Smith said. Police persuaded the boy to let his hostages go, and they ran to the school gymnasium.

Then, holed up alone for at least another hour and a half, the boy pondered suicide out loud. Police brought in his pastor, who was able to help convince the boy to surrender, said State Police spokesman Lt. Michael Baylous.

Pastor Howard Swick with Haven of Hope Ministry in Philippi said the boy had been bullied and he finally snapped.

After the incident, students said they were still trying to comprehend what happened.

"When they started taking us to the football field, that's when I realized that this was actually happening, that something actually happened," sophomore Kirsten Wetzel told CBS affiliate WOWK.

Coming to school the next day wasn't an easy decision for Smith. But one factor brought her right back into the classroom.

"I knew some of my students would, and they did," Smith said.