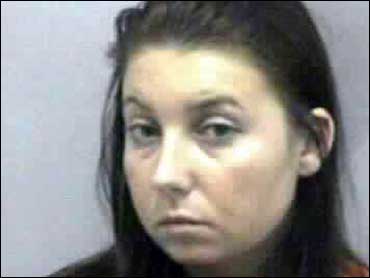 A Massachusetts schoolteacher found at a West Virginia motel with a 15-year-old boy whose parents had complained about the relationship is charged with kidnapping.

Police say 24-year-old Lisa Lavoie is being held without bond because kidnapping in West Virginia carries a possible life sentence. She faces a charge of enticing a child under 16 in Massachusetts.

The boy's mother had contacted the school earlier this month, saying she was concerned about the relationship between her son and an eighth-grade teacher. The teen was reported missing a few days later.

Officials aren't revealing where the boy has been taken, but say arrangements are being made to send him home. Police say he shows "no outward signs of physical abuse."

Lisa Lavoie, 24, appeared before a Monongalia County magistrate by videoconference from the North Central Regional Jail near Flatwoods, in central West Virginia.

Authorities in West Virginia plan to charge her as a fugitive from justice, Goodnight said. Michael Sullivan, mayor of Holyoke, Mass., said the enticement charge includes statutory rape. Lavoie will likely be released to Massachusetts authorities, but those details have not been worked out.

The boy's mother had contacted Maurice Donahue Elementary School on Feb. 13, saying she was concerned about the relationship between her son and an eighth-grade teacher. The teen was reported missing Feb. 16.

Authorities had been tracking the teacher and boy for several days through credit card and cell phone use, Sullivan said. On Monday night, state police were informed she was at the Super 8 Motel in a Morgantown shopping center just off Interstate 68.

A motel manager declined comment, but Goodnight said the staff had been in contact with Massachusetts authorities before his team arrived Tuesday morning. After confirming a vehicle in the parking lot belonged to Lavoie, troopers got a passkey and went to her room.

The door was deadbolted, and officers tried to kick it in before Lavoie and the boy opened it, Goodnight said. Lavoie surrendered quietly.

Goodnight would not reveal where the boy had been taken but said arrangements are being made to send him home. The eighth-grader will be interviewed by child welfare officials, then reunited with his family. The teen showed "no outward signs of physical abuse" when he was found, Sullivan said.

Lavoie has been a teacher in Holyoke for five months and has been placed on paid administrative leave.

"Her family and I are happy that she is safe and we'll see what develops over the next couple of days," said David Hoose, her Massachusetts attorney, before declining to comment further.

Sullivan said the city will review teacher training and student awareness programs. The Donahue principal has met with 7th and 8th grade students to advise them of counseling opportunities available, and some students are worried about their friend.

"We have to make sure students understand improper behavior and improper advances and we're going to make some changes in our professional development," he said.