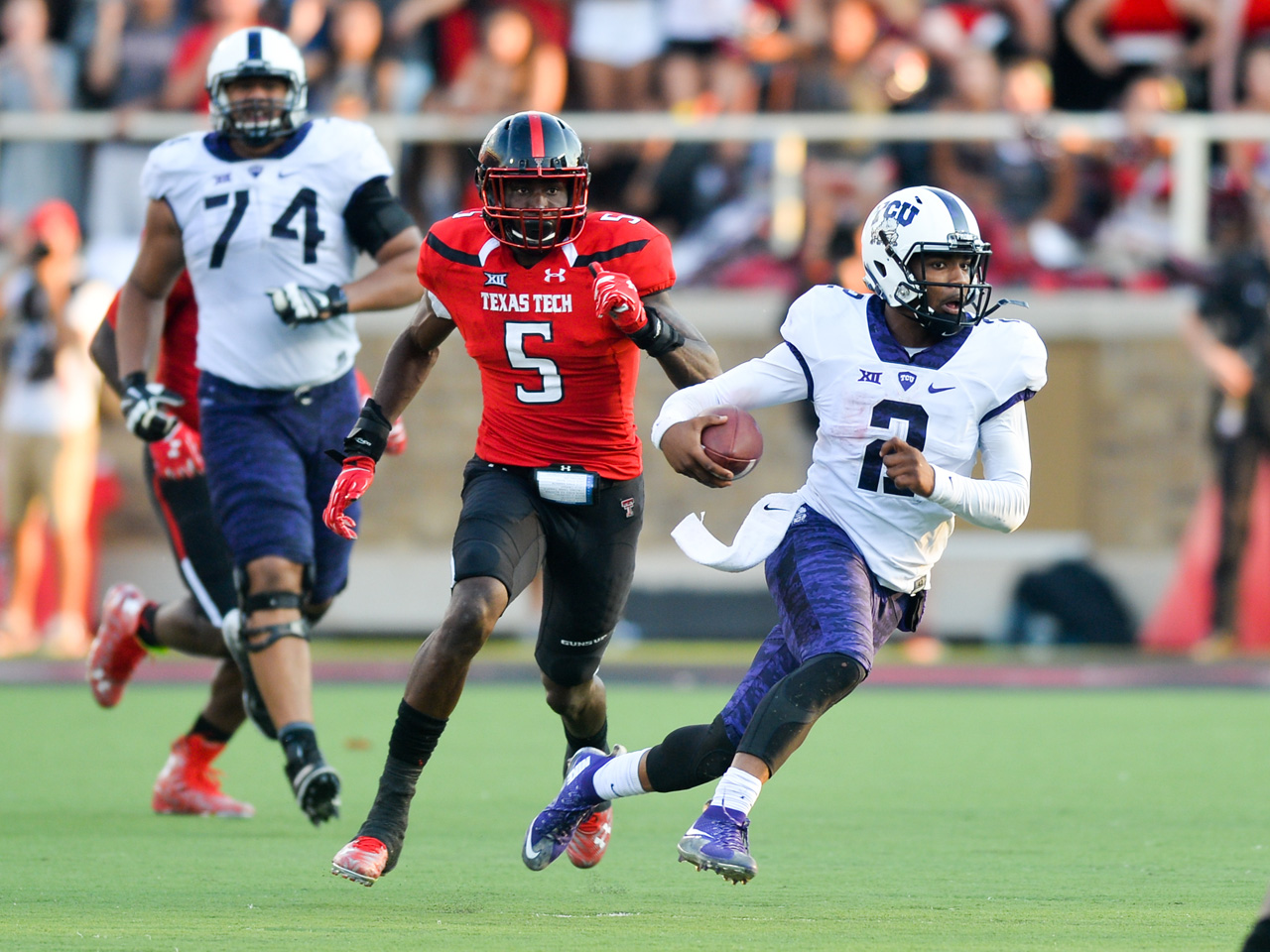 LUBBOCK, Texas - Aaron Green caught a tipped pass in the back of the end zone with 23 seconds left and No. 3 TCU outlasted Texas Tech 55-52 on Saturday in the Big 12 opener for both teams.

On fourth-and-goal from the 4, Trevone Boykin's pass was high to Josh Doctson, but he got a hand on it and Green grabbed the ball as he fell out of the end zone. A video review confirmed Green had control of the ball and got a foot in bounds.

Doctson caught three touchdown passes and had 267 yards on 18 catches - all career highs.

Green rushed for one touchdown, and the Horned Frogs got a safety in the first quarter after the snap went over Texas Tech quarterback Patrick Mahomes.

The Red Raiders didn't give up after TCU's late touchdown. On the final play of the game - after time expired and a defensive penalty on TCU - Mahomes found DeAndre Washington for a 24-yard gain. He pitched it to a lineman, who pitched it to a receiver who got the ball to Jakeem Grant. He was pushed out of bounds at the TCU 10 to end the game.

Washington ran for four touchdowns and a career-high 188 yards.

EUGENE, Ore. - Travis Wilson returned from a shoulder sprain and threw for 227 yards and four touchdowns in Utah's victory over Oregon in the Pac-12 opener for both teams.

Wilson completed 18 of 30 passes, hitting nine receivers, and ran for 100 yards and another score for Utah (4-0). The lanky senior sprained his left shoulder two weeks ago against Utah State and sat out the Utes' victory last weekend over Fresno State.

It was Oregon's worst loss at home since falling 54-0 to Washington in 1977. Utah's 62 points were the most scored against a Pac-12 opponent since joining the league in 2011, and also the most the Ducks have ever allowed in Eugene.

Vernon Adams Jr. started at quarterback for Oregon (2-2) despite a broken index finger that kept him out of the Ducks' victory last weekend over Georgia State, but he didn't last long and was replaced by backup Jeff Lockie in the second quarter. But it was Oregon's besieged defense that had no solution for Wilson and the rolling Utes, who amassed 530 yards of total offense.

Fournette has his second straight 200-yard game and fifth straight 100-yard game - and it came in a fitting place.

Syracuse's tradition is based on its stellar running backs from the past, the great Jim Brown, Heisman Trophy winner Ernie Davis and Floyd Little, a three-time All-American in the mid-1960s. The Carrier Dome field is named in honor of Davis, the first black player to win the coveted trophy. Little, now an administrator at Syracuse, watched from the chancellor's box.

LSU (3-0), which beat Southeastern Conference rivals Mississippi State and Auburn to start the season, used big plays to hand Syracuse (3-1) its first loss despite being called for 14 penalties for 120 yards.

No play was bigger than Travin Dural's 51-yard catch on a third-and-5 play in the fourth quarter after the Orange moved within a touchdown. Brandon Harris hit Malachi Dupre with an 11-yard scoring pass with 9:14 left to seal it.

Fournette gained 48 yards to set up his first-quarter score, White found a seam up the middle and raced untouched into the end zone to give LSU a 17-3 lead in the third, and Fournette tacked on a 62-yard scoring run later in the period for a 24-10 lead.

Jones played better than he did a week ago, when he was benched in the second quarter of a seven-point victory over Northern Illinois. He finished 19 of 33 for 288 yards with an interception before J.T. Barrett replaced him late in the game.

Jones threw a 38-yard scoring pass to Michael Thomas on the Buckeyes' first series, and Ohio State went up 14-0 early in the second quarter on his 37-yard pass to Jalin Marshall.

Western Michigan (1-3) made it 14-6 on a 55-yard pass by Zach Terrell to Daniel Braverman, but Terrell threw an interception that Washington returned to give Ohio State a 24-6 lead at the half.

The Spartans (4-0) have scored at least 30 points in a school-record 12 consecutive games, but they did not look particularly good offensively for most of this one. Connor Cook threw for only 143 yards, and the Chippewas (1-3) kept their upset bid alive until the final period.

It was 17-10 in the third quarter and the Chippewas had the ball when the Spartans held on fourth-and-2 from the Michigan State 37. Cooper Rush threw incomplete under pressure from Calhoun and linebacker Riley Bullough. That was as close as Central Michigan came to tying it. The Spartans added touchdown runs of 3 and 6 yards by Holmes in the final 8:37.

It was a mostly mediocre performance for the Ole Miss offense, which came into the game averaging 64 points - tops in the nation.

The Rebels' red zone offense was particularly bad. Ole Miss had to settle for three field goal attempts when inside Vanderbilt's 20. Two were made and one was blocked, which helped keep the Commodores in the game much longer than most expected.

Ole Miss (4-0, 2-0 Southeastern Conference) broke the game open midway through the fourth quarter when Walton ran for a 3-yard touchdown after two long runs earlier in the drive.

Vanderbilt (1-3, 0-2) lost its third straight against the Rebels.

WACO, Texas - Seth Russell matched a school record with six touchdown passes, three of his five in the first half to Corey Coleman, and Baylor routed Rice.

Russell threw for 277 yards and Shock Linwood ran for 158 and a score to help the Bears (3-0) extend the nation's longest home winning streak to 18 games, including the first eight at their campus stadium on the Brazos River.

Baylor, the national leader in yards and points per game coming in, had 444 yards at halftime and finished with 793 heading into its Big 12 opener against Texas Tech at the home of the Dallas Cowboys next Saturday.

Marquis Young had an 83-yard touchdown run for the Minutemen (0-3), and Sekai Lindsay and Jamal Wilson added 1-yard scoring runs.

Chubb had scoring runs of 9 and 49 yards in the third quarter. The 49-yarder gave him 12 straight games with at least 100 yards rushing. He scored on a 24-yard pass from Greyson Lambert in the first quarter.

Georgia (4-0) led 17-0 in the first quarter and then played in the second quarter as if looking ahead to next week's visit from No. 12 Alabama.

Lenard Tillery had a 16-yard scoring run for Southern (2-2).

UCLA turned this Pac-12 showdown into a laugher by halftime, turning three Arizona turnovers into touchdowns while building a 28-point lead.

Rosen had two touchdowns on 19-of-28 passing and ran for another score after struggling the previous two games. Paul Perkins ran for 85 yards and three more scores and the Bruins had 497 total yards.

Arizona (3-1, 0-1) struggled at home after rolling through a soft nonconference schedule.

The Crimson Tide (3-1) had an uneven offensive performance, but it didn't make much difference. Alabama was coming off a 43-37 home loss to Mississippi.

The Warhawks (1-2) didn't have a first down in the first 23 minutes and were held to 9 yards rushing. It was their first visit since stunning the Tide 21-14 eight years ago in coach Nick Saban's first season, which still stands as the low point of his tenure.

The Tide racked up six sacks and two interceptions.

The Aggies (4-0) had a chance to win the game on the final play of regulation, but Taylor Bertolet's 38-yard field goal attempt was just wide right.

Allen, who was 21 of 28 passing for 358 yards with with both of his touchdowns to Kirk, hit the true freshman receiver in the end zone on the second play of overtime.

Arkansas (1-3) then got its chance, but DeVante Harris tipped away Brandon Allen's pass to Drew Morgan on fourth-and-4 from the 19.

Kirk finished with eight catches for 173 yards. Josh Reynolds had three catches for 106 yards. He had a 63-yarder to set up Texas A&M's touchdown with 2:50 left, and caught the tying 2-point conversion.

Thorson, the freshman quarterback, finished 18 of 31 for 256 yards with one interception for the Wildcats (4-0). Jackson had 33 carries for an average of 5.6 yards. Dan Vitale had five receptions for 108 yards and a pair of touchdown catches, including a 66-yarder in the first half.

Arizona State (2-2, 0-1) had the ball first-and-goal at the 1 early in the second quarter when quarterback Mike Bercovici fumbled trying to hand off the ball. Chris Hawkins scooped it up and ran 94 yards for the third of the four second-quarter touchdowns for the Trojans.

Demario Richard ran for 131 yards and two scores for the Sun Devils in their Pac-12 opener.

They were stuffed on four downs deep inside Duke territory, a series before Thomas fumbled at his own 39 after a hit from Jeremy Cash with 2:12 left. Powell then took a fourth-and-1 handoff up the middle for the 30-yard touchdown run that iced Duke's second straight win over a ranked Georgia Tech team.

ANN ARBOR, Mich. - Jake Rudock ran for two touchdowns and threw for another score and Michigan scored all of its points in the first half.

The Wolverines (3-1) have won three straight under Jim Harbaugh after an opening loss at Utah. They were 1-9 in their last 10 games against ranked opponents.

The Cougars (2-2) have lost in consecutive weeks, including a one-point setback at then-No. 10 UCLA, after beating then-No. 20 Boise State by double digits and Nebraska on a Hail Mary.

De'Veon Smith ran for 125 yards on 16 carries, including a tackle-breaking, 60-yard touchdown, before leaving late in the third quarter after appearing to hurt his right ankle.

MADISON, Wis. - Taiwan Deal ran for 147 yards and two scores, and Wisconsin held a nonconference opponent without a touchdown for the third straight game.

Linebacker Joe Schobert had two sacks and the Badgers (3-1) held Hawaii (2-2) to 15 yards rushing in the first night game at Camp Randall Stadium in three years.

Deal got the Badgers' own rushing attack going with a pair of 2-yard touchdown runs in the first half. With Big Ten play looming, Deal's day was a promising sign for a Wisconsin team that will be without injured starting tailback Corey Clement for at least a month.

Grogan tied it with a 41-yarder with 1:33 left. The game appeared headed for overtime a minute later until Texas punter Michael Dickson, , an Australian rules football player, fumbled a deep snap and scrambled to get off a 10-yard punt near his own end zone.

Oklahoma State (4-0, 1-0 Big 12) almost didn't get a chance at Grogan's winner when the Cowboys were penalized with 10 seconds left. But because they still had a timeout, it did not force the 10-second runoff and Grogan calmly drilled the final kick.

The Wildcats (3-1, 2-1 Southeastern Conference) beat a ranked team for the first since topping then-No. 18 South Carolina 31-28 in Lexington five years ago.

Towles threw TD passes of 24 yards to tight end C.J. Conrad in the third quarter and the 5-yard clincher to Dorian Baker with 6:20 remaining.

Towles was 22 of 27 for 249 yards and ran for 21 yards, including a 14-yard scoring run in the second quarter. He helped the Wildcats gain 369 yards against the nation's fourth-ranked defense.