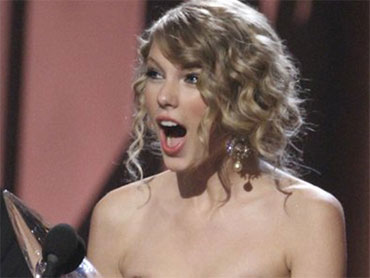 Taylor Swift has been voted The Associated Press entertainer of the year.

The 20-year-old country singer was chosen by newspaper editors and broadcast producers in a poll of AP members. She follows winners Tina Fey in 2008 and Stephen Colbert in 2007.

Swift says she's grateful for the selection. She says her year was full of "golden and shiny" memories.

Swift was seemingly everywhere in 2009, whether performing hits such as "Love Story" and "White Horse" or having her acceptance speech at the MTV Video Music Awards interrupted by Kanye West.

She also hosted "Saturday Night Live" and performed at the Grammys.