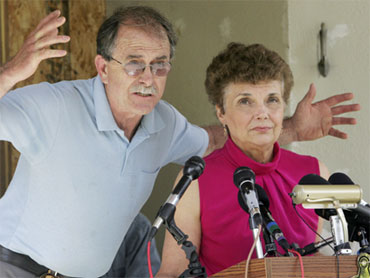 CONCORD, N.H. (CBS/AP) Nobody likes paying taxes, but one N.H. man really blew up about it.

Twenty-one pipe bombs, dozens of rifles, tens of thousands of bullets, and cans of gunpowder shrouded in strips of nails — tax evader Ed Brown said it was all to scare away U.S. marshals, not harm them, if they came to his fortified New Hampshire home to arrest him.

A jury disagreed Thursday, convicting Brown and his wife, Elaine, of amassing an arsenal to kill agents during a nine-month standoff at their 110-acre rural compound in 2007.

"He wanted to live his way, and anyone who wouldn't let him live his way, he'd kill, period," Assistant U.S. Attorney Arnold Huftalen said in closing arguments the previous day.

For the Browns, who are in their 60s, the convictions could mean spending the rest of their lives in prison. Two of the counts carry maximum penalties of life behind bars.

The couple held hands and looked straight ahead as the verdict was read in U.S. District Court. They refused to stand when the jury and judge left the courtroom. Defense lawyers declined to comment.

"By rejecting the rule of the law and substituting a personal code involving weapons, explosives and threats, the defendants committed increasingly serious crimes," acting U.S. Attorney Michael Gunnison said. "Their conduct has no place in a civil society."

Sentencing was scheduled for Sept. 3.

The couple, who insist the federal income tax is unconstitutional, holed up in their hilltop home in Plainfield in early 2007 after being sentenced to prison for tax evasion. During the standoff, they repeatedly said they would not hesitate to use their weapons against agents they expected would come to arrest them.

In the end, they were arrested with — no shots fired — by U.S. marshals pretending to be supporters who pounced on the couple while sharing pizza with them on their front porch.

"Certainly, it went on longer than we would have liked," then-U.S. Marshal Steven Monier said after the verdict. "But to do it the way we ended up doing it, and that is introducing the undercover team and essentially driving up the driveway to make the arrest, we think it was the right way to go.

"It's hard to argue with success," he said. 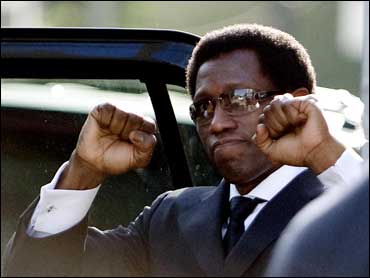 (AP PHOTO)
Photo: Actor Wesley Snipes emerges from a federal courthouse in Fla. after being sentenced to three years in jail for not paying taxes April 24, 2008. Like the Browns, he said he believes federal income tax is unconstitutional.

During the trial, Ed Brown, 66, testified the weapons were for self-defense, saying he believed the government planned to kill him and his wife. He testified that he didn't start building the bombs until June 2007, after federal agents made a failed attempt to arrest him. Prosecutors said many weapons were there already.

He denied booby-trapping the property to kill anyone and said the explosives in the woods around his home were to scare intruders, not harm them.

Elaine Brown, 68, did not testify. Her lawyer, Bjorn Lang, said that aside from a pistol she was carrying when she was arrested, there was no proof she had ever possessed any of the weapons strewn about her house.

The verdict came after seven hours of deliberation over two days.

The couple were convicted in January 2007 of not paying federal taxes on nearly $2 million in income. They fled to Plainfield rather than serve their five-year sentences. While there, they welcomed a parade of anti-tax, anti-government sympathizers, four of whom have been convicted of helping them stockpile weapons and sent to prison.

One visitor was Randy Weaver, whose wife and son were killed along with a deputy U.S. marshal at a 1992 shootout in Ruby Ridge, Idaho.

During the standoff, the Browns regularly gave media interviews, portions of which were cited in indictments. In one, Ed Brown said:

They were convicted of conspiracy to prevent their arrests, conspiracy to forcibly resist arrest, carrying and possessing firearms and explosives "in furtherance of crimes of violence," being felons in possession of firearms, obstruction of justice, failure to appear for sentencing and (for Mr. Brown only) failure to appear at trial.