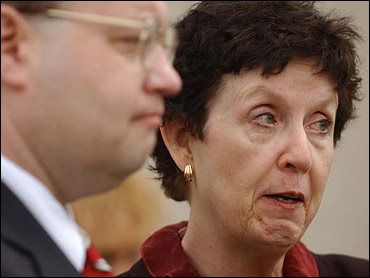 On Oct. 10, 1992, Mary Kate Gach got the worst news a parent can hear - her daughter Stephanie, a 21-year-old college student, had been murdered.

"I was stunned," Gach says. "I could not believe. I just couldn't believe it."

What Gach couldn't believe was that there was a Web site out there devoted to her daughter's killer, Jack Trawick.

Gach says, "I just can't get it through my head that anybody is so evil, and mean, and hateful, and cruel."

Posted on the Web site were lurid letters written by Trawick callously gloating about his many crimes, instructing others how to torture and kill. And there were Trawick's drawings: graphic, disturbing depictions of violence against women.

Although Gach has never seen the Web site herself, friends have told her about it, and she says the horror is haunting her once again.

"I have had nightmares. I cry," Gach says, "And so it's coming back now, the trauma of the time when he killed her."

Pointing at her daughter on a photo, Gach says, "I think that's the most beautiful definitive picture of her. Glowing with a radiant smile."

When Stephanie was killed Gach says she "wanted to lie down and die."

But with the help of family and friends, she made it through and found a new purpose in life.

Gach says, "The other thing that kept me going is to see justice, to see this person get his justice."

A few months before Stephanie Gach was tortured, strangled and stabbed to death, the mutilated body of Aileen Pruitt had been found just miles away.

When she looked at the body, Gach says, "I saw somebody that really enjoys killing people, inflicting damage on another person."

Mike Walker, a retired lieutenant with the Birmingham police department, investigated Pruitt's murder notes, "The coroner's report revealed that there were over 50 stabbing and cutting wounds."

When Trawick was arrested, he confessed to the murders.

Walker says, "He was certainly proud of what he had done." And describes Traqick as a monster. "It's pure evil," he says.

But even from death row, Jack Trawick's demonic ways have found a new outlet. Armed with pen and paper, and allegedly using the U.S. mail and/or the telephone, Trawick continues to terrorize his victim's families. In a lawsuit filed just two weeks ago, Mary Kate Ggach claims she should be compensated for the emotional distress that has resulted.

And her attorney, George Jones, explains the other reason the suit seeks $45-million from Trawick and Neil O'Connor, the man he says who posted his writings on the Web.

Jones says, "There are passages in there about how to stalk the victim, and how to strangle the victim in a slow manner so that the victim regains consciousness."

Jones is describing one of the letters written by Trawick and posted on the Web page. In another letter, the convicted killer targets Mary Kate Gach directly.

It says, "Love you, the psychotic killer of your useless daughter."

But are Trawick's writings and drawings covered by the constitution's first amendment, protecting freedom of speech?

Gach says, "I want to find out. I want to challenge that because I think this crosses the line. And I want my day in court with this."

Jones adds, "We believe that the evidence in this case is going to show that in addition to wanting to train people to kill and commit murder and rape, he wants to inflict as much emotional distress on my client as he can."

In addition to emotional distress, the six counts in the lawsuit include: invasion of privacy, commercial gain from the website, libel and obscenity.

There are six counts in the lawsuit including emotional distress, invasion of privacy, commercial gain, libel and obscenity, against Trawick and the Web site designer. It also takes the Alabama Department of Corrections to task for allowing the material to leave death row.

Gach says, "I'm angry now because now I realize in retrospect that they were not watching him. Because otherwise, how could he get all of this information out?"

Brian Corbett, the public information officer for Alabama's department of corrections contends they have shut Trawick down.

Corbett says, "We don't like this information being posted on the Internet more than anyone else does. It's horrific. It's filthy. It has no place being out there. We support Miss Gach. And we want to see this removed as well as anyone else does."

Gach isn't convinced and says the lawsuit has a broader purpose.

She says, "We don't want anybody else to have to go through this pain I'm going through right now. "

She says, "I feel like she's been dishonored. Her name has been maligned. Her memory. And I cannot have that happen. I'm fighting for her. I have been ever since Oct. 9, 1992. And I will continue to fight. I will never stop, until I'm not here any more."

The original Web site remains, though it no longer has posted Trawick's letters or drawings, but that doesn't mean his material is completely eliminated from the Web.