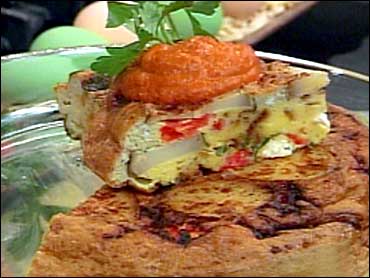 Mention tortillas, and most people think of the Mexican variety, made with corn meal. But The Early Show resident chef Bobby Flay imagines the Spanish tortilla, created from thinly-sliced potatoes.

The Spanish tortilla is more akin to the Italian Fritatta -- the major difference is potatoes take center stage instead of eggs. Flay says a Spanish tortilla is almost impossible to ruin. On The Early Show, he shared his recipe for Spanish Tortilla With Romesco Sauce.

Romesco (roh-MEHS-koh) is a classic sauce from Catalonia, Spain. It is a finely ground mixture of tomatoes, red bell peppers, onion, garlic, almonds and olive oil. It's typically served with grilled fish or poultry. What is very interesting about the sauce is everything used to make it must be prepared separately first, them combined together to be refined into the paste.

Preheat broiler. Rub pepper with olive oil and place on a baking sheet. Broil peppers until the skins are charred on all sides. Place in a paper bag and let steam for 5 minutes. Remove skin and seeds and cut into julienne.

Heat butter and oil in a medium sauté pan over medium heat. Add onions and cook until soft and caramelized (about 25 to 30 minutes). Add garlic and cook for 2 minutes. Season with salt and pepper.

Preheat oven to 400 degrees F. Rub potatoes with olive oil. Place in a small baking dish and roast until just cooked through. Remove and slice into 1/4-inch thick slices.

Preheat oven to 400 degrees F. Heat oil in a large nonstick ovenproof sauté pan over medium heat. Add the roasted peppers, caramelized onions and roasted potato slices and cook for 1 minute. Add the eggs and season with salt and pepper to taste. When the eggs begin to cook around the edges, use a spatula to gently push eggs from edge of pan into the center. While the mixture is still loose, add chunks of the goat cheese and parsley. Continue to pull eggs to center of pan. When the bottom of the eggs are lightly golden brown and set, place the pan in the oven and bake until the tortilla is set and slightly puffed (about 6 to 8 minutes). Invert the tortilla onto a large plate and cut into wedges. Serve with the Romesco sauce on the side or on top of the wedges. Garnish with fresh parsley.

Heat the olive oil in a large sauté pan over high heat until smoking. Separately sauté the garlic, bell pepper, tomatoes, chiles and bread cubes until lightly browned (about 2 minutes each). Remove each ingredient with a slotted spoon as it's done. Deglaze the pan with the vinegar.

Place all the sautéed ingredients and the deglazing liquid into a food processor and blend until smooth. Add the hazelnuts or almonds and process until finely chopped. Add the honey and season to taste with salt and pepper.