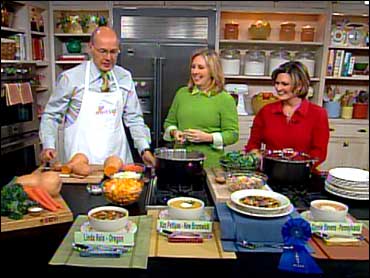 Each year, more than 15,000 home cooks submit recipes to Taste of Home magazine in hopes of winning one of the publication's six national recipe contests.

In the most recent contest, soup was up.

Trina Bigham of Fairhaven, Mass., took the top prize, and showed the secret to her soup success on The Early Show Tuesday, along with Taste of Home Editor In Chief Catherine Cassidy.

The soup recipes are in Taste of Home's current issue.

The Early Show and Taste of Home were kicking off a new partnership.

Published six times a year, Taste of Home is the No. 1-selling cooking magazine, with almost 4 million subscriptions. It comes out six times a year and is comprised almost entirely of reader recipes.

The thinking is that, if a recipe has become a favorite in one family, it will certainly be a hit in others. Of course, the magazine's test kitchen tries all of the recipes before publishing them. The dishes take a commonsense approach to cooking, using familiar ingredients and simple techniques.

In each issue, Taste of Home sponsors themed recipe contests, such as "cakes" or "picnic side dishes." Editors name a total of 12 winners: a grand prize winner, a second-place prize, and ten runners-up. The contests are among Taste of Home's most popular features.

After each contest, The Early Show will have one of the winners on to show us her or his prize-winning recipe. The winner will be joined by Cassidy, offering tips on ingredients and techniques. Other wining recipes from a given contest will also be shown on the show.

During Tuesday's segment, Bigham gave the recipe that won the "Soup's On" contest, one for Colorful Chicken 'n' Squash Soup. Her recipe was chosen from more than 4,000 entries.

According to Editor-in-Chief Catherine Cassidy, judges liked Bigham's soup because it tastes wonderful, but has few ingredients and comes together very quickly. The fact that it's so easy to prepare really clenched it, Catherine said.

Bigham started making the soup a couple of years ago, when she decided to start cooking healthier for her family. She prefers to make most meals from scratch. She even makes her own yogurt, mayonnaise and ketchup! Bigham uses mostly organic fruits and vegetables.

Her recipe came from a friend, but she made some changes, including adding kale and serving it chunky instead of pureed. Although Bigham considers this dish a specialty, she also prepares a lot of Thai food. Her husband is from Thailand, and they lived there for three years. They have three children, ages 19, 17 and 15.

As the grand prize winner, Bigham got $500 from Taste of Home, a feature in the magazine, and the chance to appear on The Early Show.

Other recipes seen on the show Tuesday:

Minestrone with Italian Sausage: This soup has lots and lots of fresh vegetables, along with pasta and Italian sausage. It freezes really well.

Gingered Butternut Squash Soup: This soup looks thick and creamy, but contains no cream. Pureeing the roasted squash with some potatoes is all it takes to give the soup its luxurious texture.

Mushroom Tomato Bisque: The tomatoes in this soup were roasted to really bring out their flavor. You don't need to seed or peel the plum tomatoes before roasting.

Land of Enchantment Posole: This is a traditional Mexican soup with pork and hominy, but this Taste of Home reader added two kinds of chilies: chopped green chilies and jalapeno peppers.

To see a Taste of Home biography of Bigham, click here.

For word on the Taste of Home's current turkey recipe contest, and to enter, click here.

For information on the magazine's current baking contest, and to enter, click here.

Contest grand-prize winners get to appear on The Early Show, just as Bingham did!

To see the winning recipes, to go Page 2.RECIPES

Method:
Place chicken and water in a soup kettle. Bring to a boil. Reduce heat; cover and simmer for 1 hour or until chicken is tender.

Remove chicken from broth. Strain broth and skim fat. Return broth to the pan; add the squash, kale, carrots and onions. Bring to a boil. Reduce heat; cover and simmer for 25-30 minutes or until vegetables are tender.

When chicken is cool enough to handle, remove meat from bones and cut into bite-size pieces. Discard bones and skin. Add chicken and salt to soup; heat thorough.

In a soup kettle or Dutch oven, cook the pork, onion and garlic in oil over medium heat until meat is no longer pink; drain. Stir in the broth, hominy, chilies, jalapeno if desired, salt, cumin, oregano, pepper and cayenne.

Bring to a boil. Reduce heat; cover and simmer for 45-60 minutes or until meat is tender. Stir in cilantro. Serve with tortilla strips if desired

Method:
Place tomatoes cut side down in a greased 15-in. X 10-in. X 1-in. Baking pan. Brush with 3 tablespoons oil. Combine garlic, salt, basil, oregano and pepper; sprinkle over tomatoes. Bake, uncovered, at 450 for 20-25 minutes or until edges are well browned.

In a large saucepan, sauté mushrooms and onion in remaining oil for 5-8 minutes or until tender. Stir in broth, tomato paste, sugar is desired and tomato puree. Bring to a boil. Remove from the heat; stir in cream. Garnish with Parmesan cheese.

In a soup kettle, sauté onion in butter and remaining oil for 5 minutes or until tender. Stir in ginger, curry, salt and pepper; cook for 2 minutes. Stir in potatoes; cook 2 minutes longer. Stir in broth. Bring to a boil. Reduce heat; cover and simmer for 15-20 minutes or until potatoes are tender. Cool slightly.

Stir in the reserved squash. In a blender, puree soup in batches until smooth. Return to the pan. Stir in milk; heat through. Garnish with sour cream if desired.

Method:
In a soup kettle, cook sausage and onion over medium heat until meat is no longer pink; drain. Stir in the carrots, celery, leek and garlic; cook for 3 minutes. Add zucchini and green beans; cook 2 minutes longer.

Return to a boil. Stir in garbanzo beans, pasta and parsley. Cook for 6-9 minutes or until pasta is tender. Serve with Parmesan cheese.

Safe For You, Poison For Your Pet