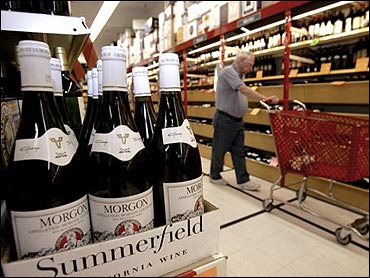 Carol Nadworny likes a good bottle of wine. She's had inexpensive wines that were nice, but she gets more satisfaction from wines that cost about $15.

"I just relax. It's an end-of-the-day thing," Nadworny, a 49-year-old fitness trainer, said while shopping at Total Wine in Alexandria, Va.

Wine drinkers are developing more extravagant tastes. Wines priced $11 and higher are selling much more strongly than others, according to the marketing information company ACNielsen.

Sales of those wines have risen by 19 percent from last year, said Danny Brager, vice president of ACNielsen's alcohol beverage team. Research shows that a 6 percent increase in sales of wine costing $7 to $11 and a gain of 1.4 percent for wines costing less than $7.

He said there is excitement in the industry about new wines, new packaging and new contemporary-looking labels.

"Along with the economy improving over the last couple of years, it's helping to move the price up that consumers are willing to pay," Brager said.

That makes sense to Phil Hein, who used to stick to $8 to $10 wines but now spends as much as $15. His tastes got more expensive as he learned more about wine.

"Finances kick in with that. If you're making more money, you're able to afford better wine," said Hein, 36, who works in sales in Washington.

When it comes to wine sales, it is impossible to dismiss the impact of the movie Sideways about two buddies on a road trip through California wine country.

The movie appears to have boosted pinot noir sales in particular. In one scene, the character Miles, a pinot noir aficionado, threatens to leave a double-date if anyone orders merlot and declares he will not drink any.

Pinot noir sales jumped 55 percent in the first three months of the year, according to ACNielsen. It tends to be a more expensive varietal, which may be helping to drive the growth in expensive wines, Brager said.

The movie was like an ad campaign for the wine industry, said Jon Fredrikson, an industry consultant based in California's Bay area. Wine makers spend relatively little on advertising compared with the beer and liquor industries, he said.

"Any kind of national attention wine gets seems to boost consumption," Fredrikson said. "In this case, it was prolonged advertising generally for wines, and especially pinot noir."

Consumers have been moving upscale in general, Fredrikson said, "but of late, it seems to be accelerating."

Merlot's growth has slowed, but it remains the second most popular variety behind chardonnay, according to ACNielsen. Other varieties — pinot noir, syrah and shiraz and pinot gris — grew by double digits over the past year.

Wineries also see potential to boost sales in a Supreme Court ruling this month that paves the way for more direct wine shipments to consumers.

Once people try a slightly pricier wine, they tend to keep buying wines at that price, said Pete Belisle, an Air Force retiree who works at Total Wine. People will say they want to spend $10 on a nice Chianti or other variety, he said.