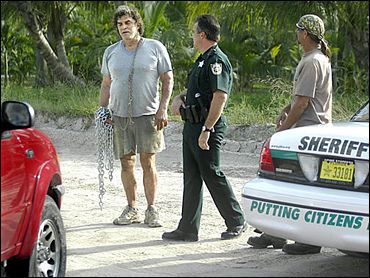 Officials were searching early Tuesday for a 6-year-old tiger that escaped from the residence of an actor who once played Tarzan.

"Our officers have been out all night, securing a containment area," Major Brett Norton, regional commander of the Florida Fish and Wildlife Conservation Commission, told CBS News Early Show co-anchor René Syler. "We brought in our special operations team to try to secure the area. This morning, we'll be putting people into the woods to look for the tiger again."

Authorities believe the big cat that escaped Monday afternoon had only roamed about 200 yards from its home.

Officials hope that after "a quiet, uneventful evening," the tiger would simply grow hungry and return home in search of food, said Willie Puz, spokesman for the Florida Fish and Wildlife Conservation Commission.

The tiger was reported missing around 3 p.m. from the home of Steve Sipek, who played Tarzan under the screen name Steve Hawkes in two Spanish movies released in the early 1970s. A native of Hungary, he also played the lead in the cult-favorite exploitation movie "Blood Freak," in which he turns into a monster turkey. He was burned in an accident while making a movie shortly afterwards, ending his acting career.

When deputies first arrived on the scene, the cat jumped on top of their car, a sheriff's spokesman said. Puz said searchers on the ground spotted the cat several times into the evening, but were never close enough to shoot it with tranquilizer darts.

"People in the general area were advised to stay indoors. They were told to bring their animals indoors," reports Belkeys Rodriguez of CBS affiliate WPEC. "Many people brought in trailers and took their horses out of the area."

Puz said officials were encouraging people to "go about their normal business."

"The tiger has only roamed about 200 yards from its home, which means it's not out free-roaming all over ... the neighborhood," he said.

Sipek has another tiger, two lions, a black leopard and a cougar on his property, the Palm Beach Post reported. The cats, mostly castoffs from zoos, are usually kept in a mazelike series of interlocking cages.

The 5-acre property is about 15 miles west of Palm Beach. It is bordered by other similar sized estates and mini-ranches, many with livestock. Lion County Safari and the swampy Loxahatchee National Wildlife Refuge are a few miles away.

In February 2002, a 750-pound tiger mauled a woman who was helping Sipek during a photo shoot at his compound. She was bit on the head.

That woman was painting Sipek's fences, reports Rodriguez, and roamed into the area where Bobo was kept. She eventually contracted bacterial meningitis from the injury.

"My understanding from the investigator that worked that case was that there was no fault that we found against Mr. Sipek," said Norton.