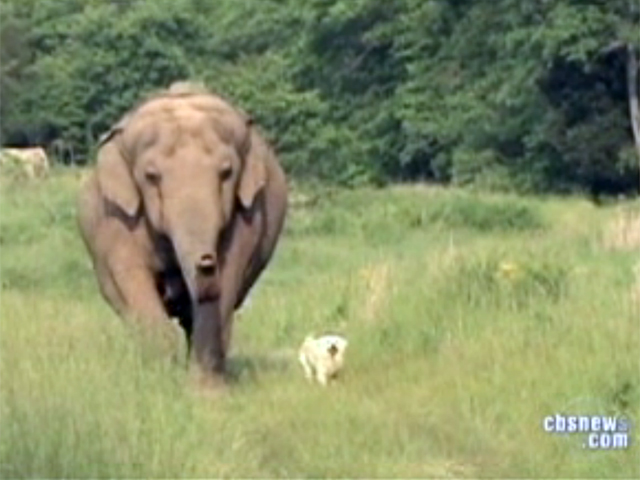 HOHENWALD, Tenn. - In 2009, CBS News correspondent Steve Hartman introduced you to a couple of very unlikely friends who couldn't have been more different. But from the moment Tarra the elephant met Bella the dog, they were inseparable.

The Elephant Sanctuary south of Nashville is more than 2,000 acres of freedom for elephants. But for a resident named Tarra, there's not enough room in Tennessee to escape the bad news she got last week.

(Scroll down to watch the original videos)

Tarra displayed all the symptoms you'd expect to see in someone who lost a good friend - which is exactly what happened.

For nearly a decade, Tarra had been best friends with a dog named Bella, a mutt who wandered onto the sanctuary grounds and into the heart of the gentle giant. Tarra clearly loved her little dog and Bella obviously bonded right back.

They were so close, in fact, that when Bella got injured a few years ago and had to spend three weeks recuperating in the sanctuary office, guess who held vigil the entire time? Twenty-two hundred acres to roam free, and Tarra just stood in the corner waiting. Home video of their reunion shows how inseparable they'd become and remained, right to the end.

Last week, sanctuary workers found Bella's body. By all indications she'd been attacked by coyotes. Whether Tarra witnessed it, tried to intervene or was too late - no one knows. All they do know is that where they found Bella is not where she was attacked.

"When I looked around and saw there was no signs of an attack here. No blood, no tuffs of hair, nothing," said director of elephant husbandry, Steve Smith. "And Tarra, on the underside of her trunk, had blood - as if she picked up the body.

Steve's theory is Tarra carried Bella possibly a mile or more to bring her home.

Whether it really happened that way or not, no one doubts Tarra was that devoted.

"There's nothing we can do to take away her pain," said Atkinson. "The only ones who can help now are the elephants. And that is already happening."

Atkinson said the elephants are "stepping in and stepping up." He said they're spending more time with Tarra and being extra nice - making gestures like giving her a portion of their food.

Of course, anyone who's lost a dog knows you can't eat your way out of the grief - as much we might try -- but still nice to know at least Tarra's not alone in this.

It's also nice to see that compassion is much more than just human.