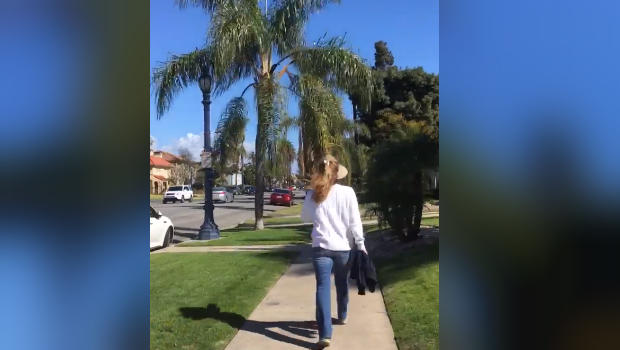 HUNTINGTON BEACH, Calif. -- A teacher accused of telling a California couple to go back to their home country was placed on leave by her college employer after a video that captured the encounter went viral, CBS Los Angeles reports. Coast Community College District (CCCD) workers said Tarin Olson was placed on leave for two weeks while they conducted an internal investigation.

"This is not being taken lightly," said CCCD spokeswoman Letitia Clark.

Olson was a career planning teacher at Golden West College in Huntington Beach. She had been with the school since 1991.

Last week, Long Beach resident Tony Kao posted the video of a woman telling him and his wife -- who were on a walk with their baby -- "you need to go back to your home country."

"I want you to tell everybody why you told us to go back to our country," Tony Kao can be heard saying before the woman affirms his remark as she walks away, CBS Los Angeles reported on March 4.

The video was posted on March 1 as the couple was on a walk with their infant on a residential street in Long Beach.

Kao can also be heard saying he and his wife were born and raised in the United States.

CBS Los Angeles spoke to Olson at her home, but she did not agree to an on-camera interview. She told CBS Los Angeles that her students know she is not a racist.

A statement from Olson read, "I feel my perspective will be twisted if discussing the skewed video which cut out part of the incident.[…] If you would like to have a full normal interview about the displacement of European-Americans then I gladly am available to enlighten the public."

Kao followed up his initial post by thanking the community for its support in the face of the shocking comments.

"First, I wanted to express our sadness of experiencing racism first-hand with our baby who was exposed to this at such a young age in public and in broad daylight," Kao wrote on his Facebook page.

The message continued, "Second, we wanted to express our surprise that this type of racism can exist in Long Beach of all places."

The sentiment was echoed by Long Beach Mayor Robert Garcia.

"I mean, this country is a country of immigrants and of diversity, and this city is a very diverse, beautiful place I think people love and feel very comfortable in," Garcia told CBS Los Angeles. "So, I never want any families to feel like they're not welcome here; we're welcoming of everybody," said the mayor.

"My reaction, especially in this city, is it's appalling," one woman said. "Long Beach is known for its diversification. We're accepting of all cultures, and for anybody to say that to begin with is horrific."

One man blamed a person "at the top."

"It's what's happening out there," Ray Sebastian. "I think it starts at the top, as far as who's at the top. So I think it's part of today's landscape. I mean, it's sad, but it's true."

Kao posted a another update Sunday, saying he had "NO intention of besmirching the offender's personal life or career." He asked the public not to foster more hatred, saying, "there's enough of those feelings in this world."