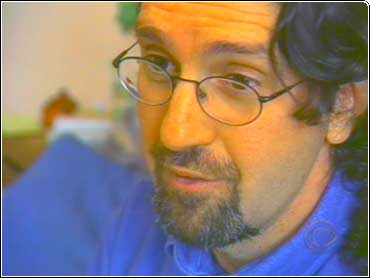 As a recovering alcoholic, Peter DeBenedittis knows the pain that drinking can cause. So it's not surprising that he wants to put a dent in underage drinking.

As spokesman for the New Mexico Media Literacy Project, he tries to get kids to question the plethora of alcohol commercials they see on TV. Advertising, he says, is a key reason that kids start drinking. Correspondent Bill Lagattuta reports on his quest.

Week after week, DeBenedittis drives for hours along New Mexico's desert roads. He has spoken to thousands of students.

DeBenedittis believes that beer companies are trying to manipulate kids with their ads. To show how the ads can be manipulative, he shows kids the ads and dissects them - sometimes frame by frame - and analyzes the underlying messages.

"I want to take kids' natural tendency to rebel and have them apply it, do some critical thinking, so they'll make choices to rebel against the people who are selling them addictive lifestyles," he says.

Showing one sexy ad to a high school class, DeBenedittis analyzed it like this: "You're addicted. Addiction is good in this commercial. You get drinks, and women, and music. They're just trying to sexualize you, so you go, 'Whoa, this is the good stuff!'"

The two largest beer makers - Anheuser-Busch and Miller - deny that their ads are aimed at kids. In a statement, the Miller Brewing Co. declared, "Any allegations that we design advertising which appeals to young people under the legal drinking age are not only wrong, but also personally offensive."

"I don't have any problems at all saying we do not target underage drinkers," says Pete Coors, the head of Coors Beer. Coors says that his company's research shows that advertising does not encourage kids to drink.

Last year Coors changed the images in its ads, from sexy swimmers to the pot-bellied Beer Man. And it's the only major beer company to run an ad campaign telling kids to hold off drinking until they're 21.

When asked why his company decided to run the new commercials, Coors says, "I think the changes have come simply because we're more aware as a society of the potential problems of abusive or inappropriate or illegal drinking."

Several researchers say that beer advertising can appeal to kids. Dr. Joel Grubee, a researcher at the Prevention Research Center in Berkeley, Calif., says that kids are especially enticed by funny commercials.

Dr. Grubee, who has been studying the issue for 10 years, asserts that when kids like the ads, they look more favorably upon drinking. He and others fear that the sassy frogs and pet beer cans featured in some beer ads could have a major impact.

In September, the Federal Trade Commission, while acknowledging the industry's general compliance with existing codes, told Congress that eight of the leading alcohol manufacturers should be doing more to avoid appealing to minors.

DeBenedittis knows that he has his work cut out for him. "I'm planting seeds. Every time I leave a presentation, I have a line of kids to come up to thank me. If I can leave that presentation knowing that there's going to be one less drunk, then I've done something."

Sex, Lies And The Doctor's Wife
Thanks for reading CBS NEWS.
Create your free account or log in
for more features.
View CBS News In
CBS News App Open
Chrome Safari Continue
Be the first to know
Get browser notifications for breaking news, live events, and exclusive reporting.