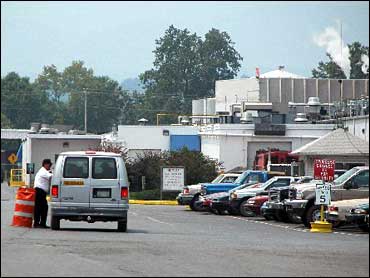 A supplier for Kentucky Fried Chicken fired 11 workers Wednesday, a day after an animal rights group released video of workers kicking, stomping and smashing birds against walls at a West Virginia processing plant.

Three of the Pilgrim's Pride workers were managers at the company's Moorefield, W.Va., processing plant; eight were hourly employees.

"We will continue with this investigation until we're confident that every employee — regardless of rank — who had knowledge of these incidents has been held accountable for their actions," president and chief operating officer O. B. Goolsby said Wednesday evening.

The Pittsburg, Texas-based company also has put quality assurance monitors on both shifts at the Moorefield plant, and managers at 24 other plants have been ordered to take time to educate workers about animal welfare policies.

The grainy videotape, which was released over the Internet, was secretly recorded between October and May by an investigator with the People for the Ethical Treatment of Animals.

"It was just terrible, it was very hard to work there,'' the undercover PETA worker told CBS News Correspondent Mika Brzezinski. "They laughed and enjoyed themselves,'' said the man, referring to the videotaped kicking and stomping of the chickens.

The group said its investigator also obtained eyewitness testimony about employees "ripping birds' beaks off, spray-painting their faces, twisting their heads off, spitting tobacco into their mouths and eyes, and breaking them in half — all while the birds are still alive."

PETA and the Humane Society of the United States want Hardy County Prosecutor Lucas See to charge workers and managers with animal cruelty, but See said Wednesday he has not finished viewing the videotapes. Once he does, he may ask local authorities to begin an investigation.

Under state law, employees found to have tortured the birds could be charged with felony animal cruelty, which carries a prison sentence of one to three years.

PETA spokesman Michael McGraw said that the group also wants all KFC suppliers, including Pilgrim's Pride, to install cameras on slaughter lines that he said move too quickly and are staffed by poorly paid workers and uncaring managers. PETA also wants the phase-in of "controlled atmosphere killing," in which chickens are gathered by machines instead of people.

"In cases where workers are paid so little — and they really do have terrible jobs — they tend to take out their frustrations on the animals," McGraw said. "Modern technology can actually be more humane."

PETA has been pressuring KFC since last year, when it sued the company and called for a boycott, demanding that KFC require suppliers to treat animals more humanely.

In a news conference Thursday, the group called for the resignation of David Novak, chief executive of Yum! Brands, KFC's parent company, saying he has not done enough to stop abuse at suppliers' facilities.

Calls to Yum! Brands were not immediately returned Wednesday.

Separately, the Humane Society's president, Wayne Pacelle, demanded that Congress hold hearings on the videotape and called for the expansion of federal laws to protect poultry from abuse.