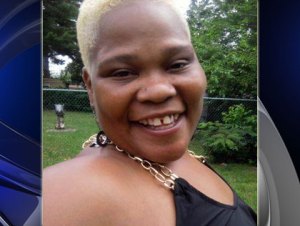 (CBS/AP) NEW YORK - A New York man who appeared in court Thursday dressed in a garbage bag said he did nothing wrong on charges that he killed and dismembered his mother.

Bahsid McLean, 23, allegedly stabbed 45-year-old Tanya Byrd and then cut up her body with help from another man, according to a criminal complaint. He was charged with murder, hindering prosecution and criminal possession of a weapon.

Byrd, a home health aide, was last seen alive Monday. Her remains were stuffed in four plastic garbage bags and scattered along four blocks in a Bronx neighborhood, police said.

"I didn't do anything wrong," McLean said during court.

Jerry Iannece, McLean's attorney for arraignment, said his client wore the garbage bag because his shorts were soaked through from urinating on himself, so court personnel gave him the trash bag to wear.

Iannece said his client was off his medication, but didn't say what type. McLean was held without bail and was placed on suicide watch in protective custody. He was also undergoing a psychiatric evaluation.

"Everybody's innocent until proven guilty," Iannece said. "Obviously this is a troubling case, but we will investigate and defend it thoroughly."

Medical examiners determined that Byrd died from a stab wound to the neck and officially ruled her death a homicide.

A neighbor's dog discovered one of Byrd's remains while sniffing out one of the bags early Tuesday on a Bronx street. The dog found the first bag with the woman's bloodied leg inside.

Police then found the three other bags and their macabre contents, including the victim's head, part of her torso and other limbs. Witnesses told police an SUV dropped the bags off Monday night or early Tuesday.

Byrd's family said she wanted her son out of the house, and there was speculation that he was abusing her other child, authorities said.

The young man had several arrests, including one for assaulting two police officers in Brooklyn in 2010. His father, James, told the New York Daily News that he did destructive things.

"He set fires. Nobody could control him," he said.

McLean and an acquaintance, 26-year-old William Harris, were first arrested on charges of unlawfully dissecting a human body and hindering prosecution. Authorities said each man initially implicated the other in the killing.

A blade was discovered in the apartment McLean shared with his mother, and a saw was found in Harris' home, authorities said.

The murder charge was later added for McLean. Harris was being held pending an arraignment.