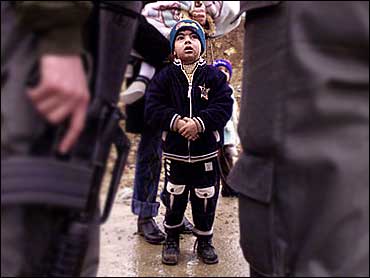 Israeli forces tightened their grip on Bethlehem Wednesday after a Palestinian sniper shot and killed an Israeli army officer in front of the Church of the Nativity, which marks the traditional birthplace of Jesus, and in the Gaza Strip, Israeli forces killed two Palestinians with a flechette shell.

In the West Bank, soldiers killed a Palestinian teen during a clash in a refugee camp.

The violence came as Muslims marked the Feast of the Sacrifice under stiff Israeli travel restrictions, imposed after Israeli officials said they had intelligence warnings of militants planning major terror attacks during the four-day holiday.

Two Palestinians were climbing a fence early Wednesday in an attempt to enter a Jewish settlement in northern Gaza, the military said, when they were killed. At Gaza's Shifa Hospital, doctors showed reporters the body of one of the men, with a dart about 5 inches protruding from his chest — part of a flechette shell.

Israeli army spokeswoman Sharon Feingold said that the flechette shell, which spreads deadly darts over a wide area, was used because it was the most efficient weapon in the circumstances.

Palestinians have charged that flechette shells are forbidden under international law, but Miranda Sissons, a Mideast expert with Human Rights Watch in New York, said that there is no formal ban on the flechette. She told The Associated Press that "they're not banned, but their use in civilian areas would be indiscriminate and disproportionate," and Human Rights Watch has complained about Israel's use of flechette shells several times.

The Israeli military responded that all the weapons and ammunition it uses are legal under international law.

In Wednesday's incident, Israeli soldiers fired the shell at the two Palestinians at the perimeter of the Dugit settlement in northwest Gaza, built on sand dunes away from Palestinian population centers. The military said the two men were armed with knives and hand grenades.

In Bethlehem, Israel withdrew two tanks from Manger Square, where they parked overnight after the officer was killed. The army said soldiers were checking a suspicious vehicle when a Palestinian fired from a nearby alley and killed the officer.

Palestinian residents said the officer was standing just in front of the church when a gunshot rang out. Bloodstains marked the spot where he fell, and soldiers covered the area with sand early Wednesday.

Shortly after the attack, Israeli soldiers declared a curfew, confining Palestinians to their homes, and two tanks rumbled into the biblical town, heading for Manger Square in front of the church.

The tanks pulled out Wednesday, though soldiers continued to patrol in armored vehicles and in jeeps.

In mid-June, Israeli forces took control of all West Bank cities and towns, except Jericho, in response to a wave of Palestinian suicide bombings.

They pulled out of Bethlehem briefly during the summer but reoccupied it in November after a suicide bomber from the town blew up a bus in nearby Jerusalem, killing 11 passengers.

Also Wednesday, in the El-Ein refugee camp next to the West Bank city of Nablus, Israeli forces arrested Kamel Khatib, 27, a senior member of the Al Aqsa Martyrs Brigade after surrounding his house for several hours, Palestinians said. During the standoff, a 17-year-old Palestinian was shot and killed. Palestinians said he was among several people throwing rocks at soldiers. The Israeli military said soldiers returned fire from gunmen.