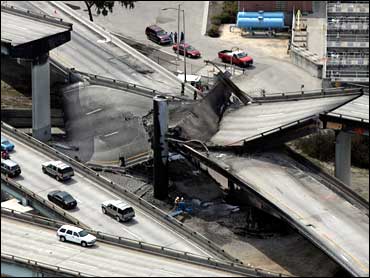 A heavily traveled section of freeway that funnels traffic off the San Francisco-Oakland Bay Bridge collapsed early Sunday after a gasoline tanker truck overturned and erupted into flames, authorities said.

Flames shot 200 feet in the air and the heat was intense enough to melt part of the freeway and cause the collapse, but the truck's driver walked away from the scene with second-degree burns. No other injuries were reported.

"I've never seen anything like it," Officer Trent Cross of the California Highway Patrol said of the crumpled interchange. "I'm looking at this thinking, 'Wow, no one died — that's amazing. It's just very fortunate."

Authorities said the damage could take months to repair, and that it would cause the worst disruption for Bay Area commuters since the 1989 Loma Prieta earthquake damaged a section of the Bay Bridge itself.

Nearly 75,000 vehicles use the portion of the road every day. But because the accident occurred where three highways converge, authorities said it could cause commuting problems for hundreds of thousands of people.

Transportation officials said they already had added trains to the Bay Area Rapid Transit light rail system that takes commuters across San Francisco Bay, and were urging people to telecommute if possible.

The tanker carrying 8,600 gallons of gasoline ignited around 3:45 a.m. after crashing into a pylon on the interchange, which connects westbound lanes of Interstate 80 to southbound I-880, on the edge of downtown Oakland about half a mile from the Bay Bridge's toll plaza.

A preliminary investigation indicated he may have been speeding on the curving road, Cross said.

Witnesses reported flames from the blaze reached up to 200 feet high.

Late Sunday morning, the charred section of collapsed freeway was draped at a sharp angle onto the highway beneath, exposing a web of twisted metal beneath the concrete.

San Francisco Mayor Gavin Newsom said the accident showed how fragile the Bay area's transportation network is, whether to an earthquake or terrorist attack, and has the potential to have a major economic effect on the city.