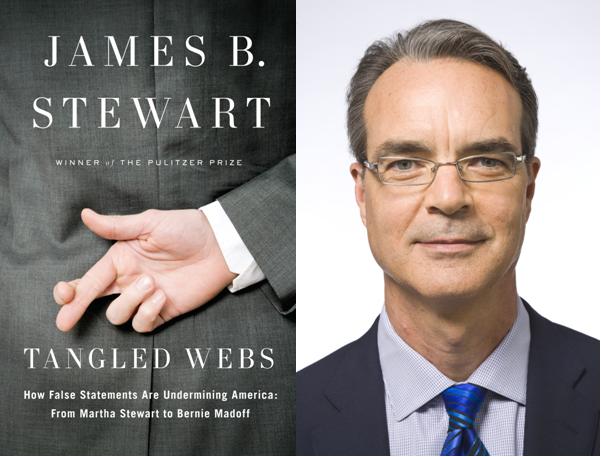 James B. Stewart's columns and books about markets and the economy are must reads. But he writes about more than just money. You won't waste your time, no matter what subject you watch him tackle. His latest, "Tangled Webs," is about false statements, and how he believes an epidemic of high-profile perjury is undermining America.

James B. Stewart: I remember exactly when I decided I had to write this book. I was giving a speech about all the corporate scandals of the last decade - Enron, Worldcom, Adelphia, Tyco-when it dawned on me that they had a common theme: chief executives lying to the public. Perjury and false statements are almost always essential to fraud. This seemed like an epidemic. What was so striking to me was that these were people at the top - rich, successful, role models and community and business leaders. And then I started seeing perjury and lying everywhere, from media to sports to politics. It was becoming the norm.

JS: I tried to start out with an open mind about whether these people accused of lying were actually guilty. But I assumed that if they had lied, they must have been good at it, even world-class liars. They were all smart, successful, well educated people. I figured Bernie Madoff must be brilliant since he'd gotten away with lying for over 20 years. But once I saw all the evidence, I was stunned at how bad they were at lying, and Madoff may have been the worst. They couldn't keep their stories straight. Yet they all seemed to think they'd get away with it.

JS: I started out as a lawyer, and I'd enjoy being a federal prosecutor. They're underpaid, but they do tremendous work and render a public service. If I could be a top partner at a big firm, advising clients and in the middle of major events, I'd enjoy that, too. I love ferreting out the truth and sharing it. My main hobby is playing the piano, and I used to dream about being a concert pianist. I did play a concerto with orchestra a few years ago, and it was an unbelievable amount of work. I'm in awe of people with the talent, discipline and drive to pull that off as a career.

JS: When I'm on book tour I like a diversion. I'm about to finish "The Little Stranger" by Sarah Waters which is a terrific Gothic thriller. I just finished "Charles Jessold, Considered as a Murderer," by Wesley Stace. On my last book tour I took up the Harry Potter series and read them all, even though I was a bit self-conscious about being seen in public with them.

JS: When I was a young journalist I used to worry that there wouldn't be another great story. I don't worry about that any more. I've put out some feelers on a new idea, but book ideas take some time to gestate. Meanwhile I'm busy on some New Yorker stories and my regular column.