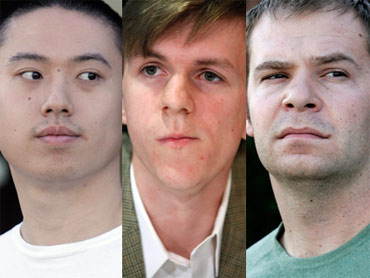 Federal authorities said two of the men with hard hats, tool belts and fluorescent vests and walked into Landrieu's office in a New Orleans federal building Monday. The others are accused of helping to organize the plan.

The most well-known suspect is James O'Keefe, 25, who posed as a pimp for a hidden-camera expose that damaged the reputation of the liberal community-organizing group ACORN and made him a conservative darling.

O'Keefe and suspect Joseph Basel, 24, formed their own conservative publications on their college campuses. A third suspect, Stan Dai, 24, was editor of his university's conservative paper and directed a program aimed at getting college students interested in the intelligence field after 9/11.

The fourth suspect, Robert Flanagan, 24, wrote for the New Orleans-based conservative Pelican Institute and had recently criticized Landrieu for voting in favor of health care legislation after securing a Medicaid provision helpful to her state.

O'Keefe was a featured speaker at a Pelican Institute luncheon days before his arrest, though institute president Kevin Kane said Wednesday that he had no idea what happened at Landrieu's office or what the four were doing there. Flanagan, son of the acting U.S. Attorney for the Western District of Louisiana, was a contract worker for the institute, mostly writing for its blog.

"Robert has done terrific work and I think very highly of him, and am very sorry to see him in this difficult situation," Kane said.

It's not yet clear whether the plan was a prank intended to be captured on camera or a more serious attempt at political espionage, as claimed by state Democrats who dubbed it "Louisiana Watergate."

Democratic National Committee spokesman Hari Sevugan said Republicans once praised O'Keefe as an American hero, "yet today, in light of these deplorable and illegal attacks on the office of a United States senator by their champion, Republicans have not offered a single iota of disgust, a whisper of indignation or even a hint of outrage."

In October, Rep. Pete Olson, R-Texas, sponsored a resolution praising O'Keefe and the woman who posed as a prostitute, Hannah Giles, for their investigation of "fraudulent and illegal practices and misuse of taxpayer dollars" by ACORN. Thirty-one Republican congressmen signed on as co-sponsors.

In response to the arrests, Olson said that "if recent events conclude that any laws were broken in the incident in Sen. Landrieu's office - that is not something I condone."

A witness told authorities O'Keefe was sitting in the waiting area of Landrieu's office and appeared to record Basel and Flanagan on his cell phone when they arrived posing as phone workers. Landrieu, who was in Washington at the time, said in a statement that the plot was "unsettling" for her and her staff.

A federal law enforcement official said one of the suspects was picked up in a car a couple of blocks away with a listening device that could pick up transmissions. The official spoke on condition of anonymity because the information was not part of the FBI affidavit. Another official said Dai was the suspect arrested outside.

All four were charged with entering federal property under false pretenses for the purpose of committing a felony, which carries a penalty of up to 10 years in prison and a $250,000 fine.

"It was poor judgment," Flanagan's lawyer, Garrison Jordan, said. "I don't think there was any intent or motive to commit a crime."

O'Keefe, Basel and Dai returned to the courthouse carrying suitcases Wednesday morning for private appointments with the department that handles arrangements with defendants before trial. None would comment as they entered and exited the courthouse.

(AP Photo/US Dept. of Justice)
Flanagan (at left), who was not with them, is the only suspect who lives in Louisiana. Basel is from Minnesota; O'Keefe, New Jersey; and Dai, the D.C.-Virginia area.

As O'Keefe left jail Tuesday with Dai and Basel, he said only "Veritas," Latin for truth.

As he got into a cab outside, O'Keefe said, "The truth shall set me free." His father, James O'Keefe, Jr., of Westwood, N.J., said he had not spoken to his son in several days and did not know he had traveled to New Orleans, let alone why he went to Landrieu's office.

"That would not be something that I can even imagine him doing," he said. "I think this is going to be blown out of proportion."

The allegations were quickly condemned by ACORN, the Association of Community Organizers for Reform Now. Its political affiliates have registered hundreds of thousands of voters in urban and other poor areas of the country.

O'Keefe's arrest "is further evidence of his disregard for the law in pursuit of his extremist agenda," ACORN CEO Bertha Lewis said in a statement. The organization's Twitter feed commented on the news: "Couldn't have happened to a more deserving soul."

Last year, O'Keefe used a hidden camera to record ACORN staffers who appeared to offer illegal tax advice and support the misuse of public funds and illegal trafficking in children.

The videos were first posted on biggovernment.com, a site run by conservative Andrew Breitbart. In the past, Breitbart has said O'Keefe - now a paid contributor to BigGovernment.com - is an independent filmmaker, not an employee.

In an e-mail to The Associated Press, Breitbart said: "We have no knowledge about or connection to any alleged acts and events involving James O'Keefe at Senator Mary Landrieu's office."

He was listed as a "freelance consultant" in a Junior Statesmen program at the Central Intelligence Agency where he appeared as a speaker.

O'Keefe and Basel were also active in conservative publications at their respective colleges, Rutgers University and the University of Minnesota-Morris. They gave a joint interview Jan. 14 to CampusReform.org, a Web site that supports college conservatives on student publications.

"I happen to call what I do shoe leather journalism and not advocacy journalism," O'Keefe was quoted as saying. "So, I would consider it just journalism."

*Correction: The headline and subhead of this story initially referrred to the suspects as attempting a "phone bug." They have been changed to reflect the fact that the men have been accused of tampering, not bugging.