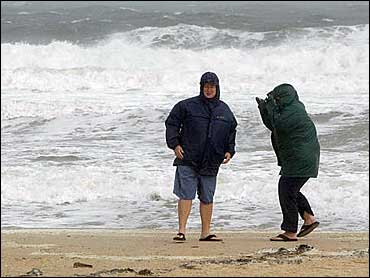 Some 380,000 Tampa Bay area residents have been told to evacuate from coastal or low-lying areas because of the approaching Hurricane Charley. It was the largest such evacuation in the history of Pinellas County, which includes St. Petersburg.

Separately, a disorganized Tropical Storm Bonnie came ashore near the central Florida Panhandle on Thursday afternoon, bringing with it lighter-than-expected wind and rain.

Pinellas County commissioners unanimously approved the evacuation order, which was recommended by county emergency management officials. It was to take effect at 6 p.m. Thursday. A similar order was issued for low-lying areas of neighboring Manatee County.

"I'm pretty comfortable that this is the prudent way to go," Gary Vickers of Pinellas County Emergency Management said. Residents who refuse to evacuate would not be arrested or forcibly removed, he said.

A state of emergency was declared for all of Florida on Thursday. Schools and government offices were closed, and Gov. Jeb Bush activated the Florida National Guard as the state prepared to deal with its first double-dose of big storms in almost a century.

CBS News Correspondent Aleen Sirgany reports that in the Panhandle, officials are more worried about the water than they are about the wind. The risk of flooding is high, with a possible four-foot storm surge rolling into an area that has already been drenched with seven inches of rain.

Some low-lying areas there may have to be evacuated if there's flooding, said Craig Fugate, the state's emergency management director.

"Residents should make sure they're getting prepared," said Daniel Brown, a forecaster at the National Hurricane Center in Miami. "They're both something people should be watching."

Such a double-whammy hasn't happened in Florida since Oct. 17, 1906, when two tropical storms hit the state, said Ken Reeves, the senior meteorologist at AccuWeather, a commercial forecasting center.

According to Hurricane Center projections, both storms could spread rain along the East Coast after hitting Florida. For North Carolina, the heavy rain from the storms was coming just a week after Hurricane Alex damaged parts of that state's Outer Banks.

Bonnie could dump 4 to 6 inches of rain, leading to coastal storm surges 1 to 3 feet above normal, forecasters said.

Charley was expected to remain at hurricane force when it passes over mainland Florida, forecasters said. Three to 6 inches of rain were expected, with higher amounts possible, Brown said.

In Key West, the electronic sign at the Waffle House scrolled a message to the storm, "Stay Away Charley." Plywood and metal storm shutters graced only a few homes and businesses and most streets were quiet.

Lisa Kaminski, a Key West native who manages a Days Inn there, said that while guests were told to leave, she and her employees weren't too worried about Charley. "We're staying," she said. "This isn't a big one."

Key West Mayor Jimmy Weekley asked bars, shops and restaurants to shut down at 10 p.m. Wednesday, but many remained open past midnight. Raymond Moffitan, who wore a velvet hot dog bun hat, barked out offers of hot dogs and chili dogs for a "Hurricane Special — $2."

The storm is also slowly making its way toward Cuba and storm warnings have been issued for Pinar del Río province west of the capital and Matanzas to its east and the Isle of Youth to the South, reports CBS News Producer Portia Siegelbaum. Cuba's National Weather Service is warning that even if the storm continues in a north- westerly direction, the central provinces of Villa Clara, Cienfuegos and Sancti Spiritus can expect heavy rains even if they don't get the high winds.

In advance of this new hurricane, more than 25,000 people have been evacuated from the province.

The storms forced ships to change their routes in Florida, which has the world's busiest cruise ship ports. Carnival Cruise Lines reshuffled the ports of call for several ships to avoid the storms, and Royal Caribbean Cruises Ltd. was doing the same, officials said.

In Islamorada, in the northern Keys, Lou Anne Settle and Jordan Davis shrugged off the hurricane, sipping wine and gazing at the sunset along the marina where they live in a houseboat. They had no plans to leave.

"It's a little early to be worried," Davis said, before raising her glass and toasting, "to the hurricane — to Charley."