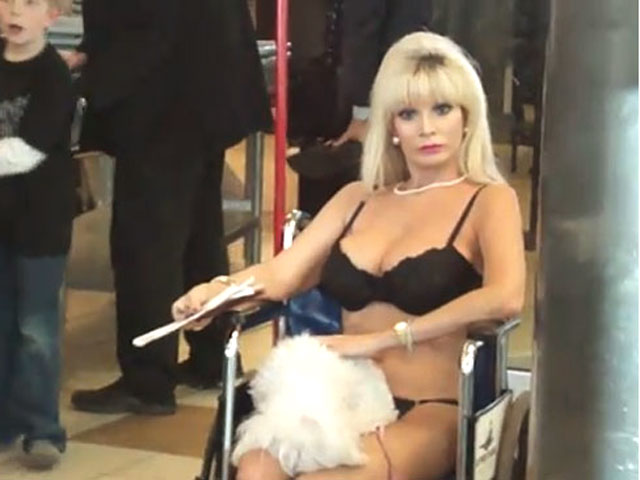 OKLAHOMA CITY (CBS/KWTV) Tammy Banovac is obviously one airline passenger who doesn't believe in flying under the radar.

The Oklahoma City woman, a retired surgeon who uses a wheelchair, tried to clear security at the Will Rogers World Airport Tuesday wearing just a bra and panties - all the while, clutching a small, white pooch.

According to The Oklahoman, the 52-year-old Banovac arrived at the airport   wearing a trenchcoat, but disrobed when it came time to go through security - an incident captured by a fellow flier and posted on YouTube.

Banovac chose the more than half-naked approach because she claims she had previously had an unpleasant "hands-on" experience at the airport, reported The Oklahoman.

She says that typically she is hand-searched because she uses a wheelchair; however, she feels violated due to the more invasive searches that have recently been employed.

"If it happened anywhere else, it would have been sexual assault," Banovac told the newspaper.

Airport spokeswoman Karen Carney told CBS affiliate KWTV that on Tuesday Banovac refused to go through the metal detector after she had stripped down on her own, and that's why she was once again subjected to a search that included the pat-down.

When TSA agents investigated, they say they found traces of nitrate residue on her body, which Carney said could be from medication, or from hunting, among other fairly common things.

After more than an hour of hand searches and questioning, Banovac missed her flight to Phoenix.

She said a TSA supervisor told her to leave the airport and "come back tomorrow," according to The Oklahoman.

Then early Wednesday morning, an unabashed Banovac did indeed return to the airport, where she once again confronted security in only a bra and panties. However, this time she passed the TSA test, and was allowed to board her flight - after putting on a shirt, that is.