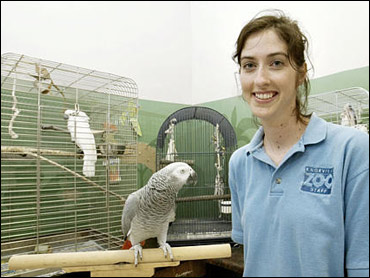 Just in time for an appearance on "The Tonight Show with Jay Leno," Einstein has learned how to say "Yee-haw!"

Einstein is a star at the Knoxville Zoo's Bird Show, is known to viewers of cable TV's Animal Planet and is a favorite with children when her trainers take her to local schools. She has even traveled with Knoxville tourism officials to help sell out-of-town organizations on the idea of scheduling a conference or event in the city.

"Usually if there's a camera and microphone, she's a ham," said trainer Stephanie White, who will accompany Einstein for the scheduled Wednesday appearance on "The Tonight Show."

White taught Einstein to say "Yee-haw!" after using Tennessee as the cue word. The zoo's group of bird trainers reinforced the word by repeating it all day so Einstein would hear it. She also gets a sunflower seed when she says it.

Einstein, whose vocabulary ranges between 70 and 80 words, phrases and sounds, was donated to the zoo in 1992.

African grey parrots are among the best talkers and most intelligent of birds, but not every one is like Einstein. The zoo has another one named Allie, but she has learned only a handful of words.

Some people have been so floored by the bird's abilities; they've said the trainers are really just ventriloquists.

"Some see in person and don't believe," said Erin Gray, another trainer.

Einstein has mimicked all kinds of sounds after hearing them, like dripping water from a faucet.

One day she started singing "Happy Birthday" while riding in a car on the way to a show-and-tell.

"We don't know where that came from," White said.