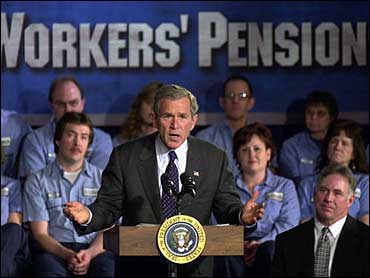 With congressional midterm elections coming up in the fall, Mr. Bush also used his brief appearance at a family-owned Iowa printing company to respond to new Democratic questions about the cost and aims of the war against terrorism.

"We will defend freedom at any cost," Mr. Bush declared to applause from workers.

A short drive away, at a downtown hotel, the president scooped up some $475,000 for the Iowa state GOP and area Rep. Tom Latham's re-election campaign before heading back to Washington and a weekend at Camp David.

Two years from now, Iowa will be crucial to Bush's own re-election hopes.

With Democrats angling to make campaign hay of the Enron case involving top Bush political supporters, the president was focused at The Printer Inc. on neutralizing that issue without actually mentioning the word Enron or breaking new policy ground.

"I'm worried about what's taking place on the, uh, what we've seen in the newspapers here in America," he said.

He reiterated his appeal to Congress to pass pension changes that would allow workers to sell company stock in their 401(k) accounts and diversify into other investment options after three years; give workers 30 days' notice before any blackout where they wouldn't be able to change or access their retirement accounts, and bar officers from selling their company stock when workers cannot.

He also called on Congress to shield from "junk lawsuits" employers who want to make third-party investment counselors available to workers seeking financial advice. And he called for tax incentives for employers to set up 401(k) plans for their workers.

At Enron, under the stewardship of Bush campaign donor Kenneth Lay, thousands of workers watched their pension savings evaporate while top executives cashed in millions of dollars in company stock. Mr. Bush made his pension-protection proposals after the Enron stories came out last year.

"The whole point is this: We ought to do everything we can in Washington to make sure people own a piece of the future," Mr. Bush said Friday.

Baby boomers, who are expected to live longer "if we behave ourselves," bear a special responsibility to build bigger retirement nest eggs for themselves, he added. "I don't know about you, but I plan to be active after I reach the so-called retirement age."

By adding even an hour-long piece of such official business to a trip, the White House is able to shift to taxpayers a portion of the president's travel costs that would otherwise fall entirely on the Republican beneficiaries of his fund raising.

On Wednesday, Mr. Bush did the same in Charlotte, N.C., only there the policy discussion was on welfare reform and the fund raising was for his former rival, Senate candidate Elizabeth Dole. A Monday trip to Minneapolis is due to dually address the issue of teacher training and the campaign coffers of Senate candidate Norm Coleman.

At Friday's lunch, Mr. Bush said Latham's seat on the House Appropriations Committee and his agreement with the president's military spending increases are reason enough for Iowans to re-elect him.

Des Moines itself is not part of Latham's district, a point that Democratic challenger John Norris underscored when he suggested from nearby Carlisle (which does fall within Iowa's 4th district) that the Republican duo's itinerary on Friday was wholly about courting special-interest campaign contributors.

"While I welcome President Bush to Iowa, I'm disappointed Tom Latham is not bringing him to meet the Iowans of this district who are hard hit by the recession and rising health care costs," said Norris.

Iowa, with its news media outlets concentrated in Des Moines, is key to Mr. Bush's 2004 re-election plans. He lost the state to Al Gore by just 4,500 the last time around.

As Labor Secretary Elaine Chao, who traveled with the president Friday on his fourth trip to the state in 13 months, teased him: "Mr. President I get the strange feeling you've been here before."