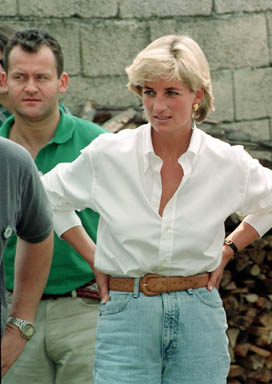 The rejection came in a statement by Abdul Salam Zaeef, the Taliban ambassador to Pakistan. Asked whether the Taliban would hand over bin Laden, Zaeef said, "No." But his translator said, "No, not without evidence."

He also said he had no information on bin Laden's current whereabouts.

At a news conference in Islamabad, the Taliban ambassador said he was sorry that people had died in the suicide attacks on the World Trade Center and the Pentagon last week, but appealed to the United States not to endanger innocent people in a military retaliation.

"Our position on this is that if America has proof, we are ready for the trial of Osama bin Laden in light of the evidence."

Asked if he was ready to hand bin Laden over, he snapped, "No."

He also called for an investigation by the United Nations and the Organization of the Islamic Conference into the attacks, and criticized President Bush's remarks made in a speech late Thursday.

Mr. Bush demanded in his speech before members of Congress that the Taliban surrender bin Laden, release imprisoned Americans, and give the United States full access to terrorist training camps. These demands are not open to discussion, Mr. Bush said. "They will hand over the terrorists or they will share in their fate."

The Taliban envoy added that his government was ready if necessary to defend the country against American attack.

"If they want to show their might, we are ready and we will never surrender before might and force," Zaeef said. "According to Islam, the blood of anyone who spies for the enemy or sympathizes with it in time of war must be shed."

Zaeef's comments Friday came a day after Afghanistan's Islamic clerics urged bin Laden to leave the country on his own accord.

The clerics' statement, issued at the end of a two-day meeting of the Ulema, or council of religious leaders, set no deadline for bin Laden to depart and included a warning of a jihad, or holy war, against the United States if its forces attacked this impoverished country.

The Taliban, a devoutly Muslim religious militia that controls about 95 percent of the country, have allowed bin Laden to live in Afghanistan ever since the government of Sudan pressured him to leave.

The Taliban leadership say they are able to convey information to bin Laden through radio communication with Taliban security personnel who travel with him.

Mohammed Hussein and his family of seven loaded their belongings into a pickup truck and headed south to join relatives in Logar province south of Kabul.

"Out of 20 homes on our street most of the families have left," said Mohammed Hussein as he piled his wife and six children into a pickup truck to join relatives in a province south of Kabul. "Anyone who can is leaving."

Meantime, fierce fighting raged in northern Afghanistan on Friday as Taliban troops battled opposition forces seeking revenge for the assassination of their leader while taking advantage of threats of U.S. strikes.

The latest battle broke out on Thursday in a region south of Balkh and in Dara-i-suf in neighbouring Samangan province where the opposition Northern Alliance, headed by Burhanuddin Rabbani, reported the capture of several Taliban posts and dozens of villages.

There were also reports that the leader of Afghanistan's Uzbek minority, General Rashid Dostum, had concentrated a considerable force near the northern city of Mazar-i-Sharif to fight the Taliban.

On Friday, the Northern Alliance said it had driven the Taliban out of Dara-i-suf, whih lies on a strategic Taliban south-north supply line, but the Taliban had struck back with air power.

The figures could not be verified because of the remoteness of the rugged region. The Taliban confirmed fighting had erupted in the area but gave no other details.

The next day, hijackers seized four aircraft in the United States and flew three of them in suicide attacks on the twin towers of the World Trade Center in New York and the Pentagon in Washington.