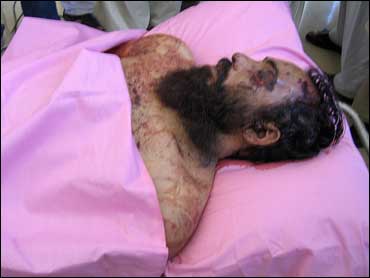 Qari Yousef Ahmadi, who claims to speak for the Taliban, told The Associated Press that Omar and other top Taliban leaders passed condolences to Mullah Dadullah's family over the killing by the U.S.-led coalition, the first Taliban confirmation of Dadullah's killing.

Ahmadi read a statement attributed to Omar insisting that Dadullah's death "won't create problems for the Taliban's jihad" and that militants will continue their attacks against "occupying countries."

A NATO statement confirmed Afghan reports on the death of the feared militant commander during a U.S.-led coalition operation supported by NATO troops.

Dadullah, a top lieutenant of Taliban leader Mullah Omar, was killed Saturday in the southern province of Helmand, said Said Ansari, the spokesman for Afghanistan's intelligence service. Afghan forces assisted in the operation.

"Mullah Dadullah Lang will most certainly be replaced in time, but the insurgency has received a serious blow," the NATO statement said.

A Pakistani intelligence official, speaking on the condition that he would not be named, told CBS News' Farhan Bokhari that Mullah Dadullah's death "would mark one of the most significant setbacks to the Taliban in a very long time."

The official said Mullah Dadullah had emerged not only as a key Taliban commander in the past two to three years but was probably "among a handful of people who knew more about the Taliban operational strategy than anyone else."

Dadullah is one of the highest-ranking Taliban leaders to be killed since the fall of the hardline regime following the U.S.-led invasion in 2001, and his death represents a major victory for the Afghan government and U.S. and NATO troops.

"Mullah Dadullah was the backbone of the Taliban," Kandahar Gov. Asadullah Khalid said. "He was a brutal and cruel commander who killed and beheaded Afghan civilians."

Khalid showed Dadullah's body to reporters at a news conference in the governor's compound. An Associated Press reporter said the body, which was lying on a bed and dressed in a traditional Afghan robe, had no left leg and three bullet wounds: one to the back of the head and two to the stomach.

The AP reporter said the body appeared to be Dadullah's based on his appearance in TV interviews and Taliban propaganda videos.

In December, a U.S. airstrike near the Pakistan border killed another top Taliban commander in southern Afghanistan, Mullah Akhtar Mohammad Osmani. Dadullah, Osmani and policy-maker Mullah Obaidullah had been considered to be Omar's top three leaders.

Dadullah, who comes from the southern province of Uruzgan, lost a leg fighting against the Soviet army that occupied Afghanistan in the 1980s. He emerged as a Taliban commander during its fight against the Northern Alliance in northern Afghanistan during the 1990s, helping the hardline militia to capture the northern city of Mazar-e-Sharif.

Since the Taliban's ouster in late 2001, Dadullah became recognized as the militant group's most prominent and feared commander. He often featured in videos and media interviews, and earlier this year predicted a massive militant spring offensive that has failed to materialize.