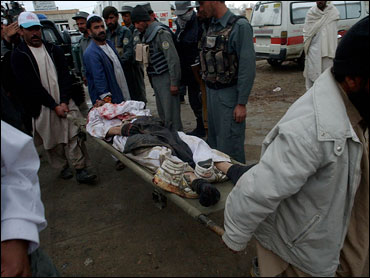 Insurgents staged two attacks against police in Afghanistan on Thursday, killing nine officers and wounding six others, officials said, in the latest violence against the lightly armed force that has born the brunt of rising attacks across the country.

Washington has pushed to significantly increase the number of Afghan police and improve their training as a key part of a revised U.S. strategy for Afghanistan and Pakistan that President Obama is expected to unveil fully on Friday.

The strategy is aimed at countering Taliban militants, who have made a comeback following their initial defeat by U.S.-led forces in 2001. Obama has already pledged to send 17,000 additional troops to Afghanistan to battle the Taliban and could send even more as part of the administration's new strategy.

Many of the troops will be sent to southern Afghanistan, the heartland of the Taliban insurgency where militants attacked a police checkpoint Thursday, killing nine policemen, the Interior Ministry said. It said the checkpoint in southern Helmand province's Nahri Sarraj district was attacked by "enemies of Afghanistan," a common reference to Taliban militants.

Police often have fewer weapons and less training than Afghan and international troops, leaving them vulnerable to militant attacks. They are also widely seen as corrupt.

Richard Holbrooke, the American envoy to Pakistan and Afghanistan, said Saturday that the new U.S. strategy for the war in Afghanistan would focus on improved recruitment and training of the country's national police force.

Holbrooke, speaking at a debate in Brussels, said the plan would push for a "very significant increase" in the number of police.

He said a larger police force will free up NATO and U.S. troops to concentrate solely on military actions to help stabilize Afghanistan.

U.S.-led forces toppled the Taliban government in Afghanistan in 2001, and many militants fled south and east into Pakistan. With the help of bases inside Pakistan, the Taliban has staged a violent comeback, especially in the last three years.

U.S. and Afghan intelligence officials have said they suspect rogue elements in Pakistan's intelligence agency of providing key information to the Taliban.

The New York Times carried a report on its Web site late Wednesday saying the assistance could go further than providing information.

The newspaper - citing American, Pakistani and other security officials who spoke anonymously because they were discussing intelligence information that they are not supposed to make public - said the widening Taliban campaign in southern Afghanistan is made possible in part by direct support from operatives in Pakistan's military intelligence agency, the Directorate for Inter-Services Intelligence.

The Pakistani officials said they had firsthand knowledge of the connections, though they denied that the ties were strengthening the insurgency. The newspaper said the Pakistani Embassy in Washington declined to comment.