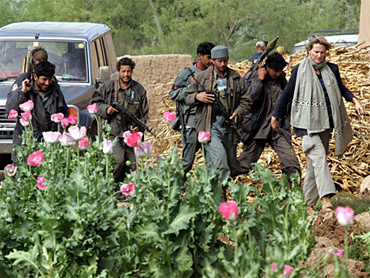 The author of a compelling new book on the Taliban says the Taliban and al Qaeda should be treated more like criminals than holy warriors.

Today many of these terrorists are motivated more by greed than religion or ideology, according to the author Gretchen Peters, whose book, "Seeds of Terror: How Heroin is Bankrolling the Taliban and Al Qaeda," was recently published by Thomas Dunne Books.

"They start to look more like Tony Soprano and his guys than holy warriors," Peters said in an interview with CBS News. "They behave like criminals. They're involved in the drugs trade, human trafficking, kidnapping, gun running…all sorts of criminal activity."

Peters is a former reporter who covered Pakistan and Afghanistan for more than a decade. As one of the first female American journalists working in war-torn Afghanistan, she is considered an expert on the Taliban and the legendary Afghan drug lords who bankroll the Taliban and other terror groups by giving them billions of dollars in profits to protect their global heroin networks, money which is then used to fight U.S. troops and NATO coalition forces.

A new strategy in the war in Afghanistan aimed at choking off the flow of money to the Taliban has been launched by dozens of agents from the Drug Enforcement Administration who are now working on the ground in Afghanistan. The agents are using traditional drug fighting techniques such as sting operations to capture these drug lords and disrupt their heroin operations.

Several of these top Afghan drug lords have been brought to the United States to face trial on federal narco-terrorism charges. They've been prosecuted by a unit of specially trained assistant U.S. Attorneys from the Southern District of New York: To date, two have been convicted and one is awaiting trial.

In an exclusive report, CBS News chief investigative correspondent Armen Keteyian revealed the recent capture of yet another big drug lord along the Pakistani border. Haji Bagcho was flown into Andrews Air Force base outside Washington, D.C. before dawn Wednesday on a drug trafficking indictment stemming from his suspected financing of the Taliban. He arrived on U.S. soil following weeks of sensitive extradition negotiations.

Peters called the strategy to go after the drug lords who are financing the Taliban and other terrorist groups, "a step in the right direction."

It weakens the Taliban, disrupts their operations and their ability to fight U.S. troops and their support of terrorism, she said.
.
The author noted that although the drug lords have close ties with the Taliban, "a lot of these guys really don't behave like pious Muslims," she said. "I mean, we heard stories of parties-alcohol-drenched parties lasting late into the night," Peters said. "Russian prostitutes, weekends, dirty weekends in Dubai."

Peters said that she is not suggesting that the Taliban have put aside their ambition to push western troops out of Afghanistan and re-take the country.

"I am also not suggesting that Al Qaeda has put aside its intention to attack the West. Far from it," she said. "In fact, I contend that they are saving up for the next-for the next attack."