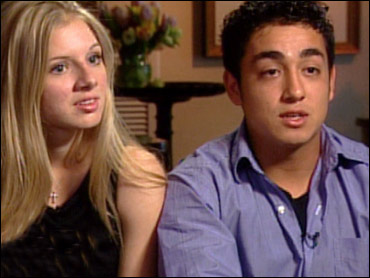 For about two decades, the top public health agencies in America urged young people to use condoms to reduce the risk of HIV/AIDS and other sexually transmitted diseases.

But the U.S. government has dramatically reversed course. Over the past five years, it has spent nearly $1 billion to persuade young people that the only safe form of sex is within marriage -- and that condoms are not as effective as people think.

Hundreds of millions of dollars are being spent to bring the Abstinence-Only-Until-Marriage message to the nation's classrooms. Millions more are going to religious organizations that urge kids to take a virginity pledge promising to remain abstinent-until-marriage.

As first reported in May, it's a message many young Americans are eager to hear.

Amy Fritsche and Rick Gutierrez are high school sweethearts in Fort Myers, Fla. They're planning to do what more than two million young people have already done in the past 10 years: Take a pledge to remain virgins until marriage.

"You are not a virgin, right?" Bradley asks Rick.

"So you're OK with this? You don't mind?" asks Bradley. "Even though you've had sex before, you don't mind not having sex with your girlfriend?"

What do their friends who are sexually active think about Amy and Rick's decision?

Amy and Rick will be taking their virginity pledge at a music and light sex-education show called Silver Ring Thing. In the last few years, Silver Ring Thing has received more than $1 million in federal and state subsidies. Its aim is to encourage young people to put on a ring and promise to abstain from sex until marriage.

Denny Pattyn, a Christian youth minister, founded Silver Ring Thing in 1996. "After three-and-a-half hours of giving them our best shot [on stage], 75 percent become convinced and put on the ring," says Pattyn. "Our goal actually is to create a culture shift in America. We want to see the concept of abstinence be the norm rather than the exception."

"We spoke with some of the kids after the show in Fort Myers and they said that going into the program they thought that condoms did work, but your show convinced them that they didn't," says Bradley to Pattyn.

"You're telling kids not to have sex. But some kids are going to have sex," says Bradley. "What do you tell those kids. You tell them not to wear a condom?"

"A kid's part of your program, and he comes to you and says, 'You know, I'm going to have sex. I've reached a point and I'm going to do this. Should I use a condom?' What do you say?" asks Bradley.

But wouldn't his daughter be more protected with a condom than without? "Not long term," says Pattyn.

The federal government is spending $167 million this year to spread that abstinence-only message. And there's a law that says that for a program like Silver Ring Thing to receive government funding, it must not talk about the health benefits of using condoms -- only about how they fail.

Is this a good thing?

"It's a good thing because I've looked at the last 30 years. I've seen what the safe sex teaching has created both here and internationally," says Pattyn. "Thirty years and $5.4 billion later, of federal funds, look at what we have. We have a massive, massive mess sexually with teenagers."

It was a $45-million project, funded by 17 separate federal agencies. Bearman's investigators interviewed more than 20,000 young people about virginity pledge programs -- and there was some good news.

"Pledging will help them delay sex for, say, 18 months — a year and a half," says Bearman. "It's a big deal in the lives of teenagers. Eighteen months is a phenomenally long time. It's almost two school years."

So what's the downside?

Why do they not use condoms?

"They've been taught that condoms don't work; they're fearful of them. They don't know how to use them," says Bearman. "Their peers don't use them. They have no experience with them. They don't know how to get them. They're hard to get access to. For whatever reason they don't use them, that has long-term consequences." Not only are kids who take virginity pledges just as likely to have sexually transmitted diseases as kids who don't, but they are even more likely to engage in high-risk sexual behavior. This finding - something that really surprised Bearman -- appeared two months ago in the Journal of Adolescent Health.

"They're not thinking they're having sex?" asks Bradley.

"So they're probably less likely to get tested for a sexually transmitted disease?" asks Bradley.

But for Pattyn, the abstinence pledge isn't just about preventing disease. How important is faith in what he does now? "It's absolutely critical," says Pattyn, "because teenagers themselves tell us how important religious values are in making decisions of this magnitude."

"There's a group of people who are using abstinence as a vehicle, pretending to be concerned about public health," says Bearman. "But it's really a vehicle to advance a program, a cultural program that doesn't help public health."

"Well, it would if they didn't have sex," says Bearman. "But they do eventually have sex, and then they have unprotected sex, and that doesn't protect you."

Based on those interviews with more than 20,000 young people who took virginity pledges, Bearman found that 88 percent of them broke their pledge and had sex before marriage.

But the White House isn't relying only on virginity pledge programs to get the message across. Its main focus is the nation's schools.

"The message is very important, not just for the Bush administration, but for the country. Parents are concerned about what's happening to their kids," says Allen. "Young people in this country are contracting sexually transmitted diseases at an alarming rate. And therefore it is a high priority for the administration as well for American families."

"What's wrong with telling kids, 'You should be abstinent, abstain from sex. But if you are going to be sexually active, use a condom'?" asks Bradley.

"In the case of sexually transmitted diseases and pregnancy, the only 100 percent prevention message is to abstain," says Allen.

"So you're saying if you say, 'Abstain, but if you do have sex, use a condom,' that that's sending a mixed message to kids?" asks Bradley.

"Well, certainly it sends a mixed message, and I believe what you need to look at is that first of all, kids are most protected in an environment where they're getting clear messages from the adults in their lives," says Allen.

As recently as 1988, just one in 50 junior and senior high schools taught abstinence-only-until-marriage programs. Today, those programs are in about one-third of schools in the United States, reaching some eight million students.

At Union Grove High School in McDonough, Ga., kids get the abstinence message from a curriculum called Choosing The Best, whose publisher has been awarded $4 million in federal assistance. Today's lesson: Condoms often fail.

What teachers like Laurie Sponsler can't do, if they follow the curricula, is tell students that when condoms are used correctly, they are nearly always effective. And if a student asks how to use a condom, Sponsler's not supposed to tell.

But condoms are not an issue right now for Amy and Rick. They say that so far they've been able to keep the virginity pledge they took three months ago.

Is there any temptation?

"Definitely, there is," says Amy.

"There is temptation, but this ring helps you out a lot," says Rick.

"But are you aware that 88 percent of people who take the pledge [end up breaking the pledge]?" asks Bradley.

"But the pledge still works because you still have that small percentage that do keep their commitment, and that do want to keep the promise and save sex until marriage," says Amy. "And if you have a small percentage, it's better than nothing."

"Right," says Bradley. "But if most of the people who take it break it, then it doesn't work."