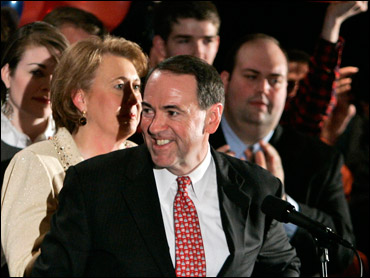 It is no secret that Southern Baptist preacher Mike Huckabee positioned himself as a "Christian leader" to win Thursday's Iowa Republican presidential caucuses. Huckabee's campaign featured a glowing cross in one television commercial and the ancient Christian symbol of a fish as the backdrop in another. And he slipped Biblical quotes and paraphrases into his campaign rap -- even suggesting when he pulled an attack ad that he did so because "we want to do unto others as we wish they would do unto us."

It worked in Iowa, where evangelical Christians have been prime players in Republican politics for three decades.

A CNN survey of Republican caucusgoers Thursday found that six in 10 identified themselves as "born-again" Christians. Huckabee won the support of 46 percent of them, while just 19 percent backed Mitt Romney.

So it was that, while he was outspent by what he estimated to be a 15-1 margin, and while he faced withering attacks from rival Mitt Romney's camp and independent groups, Huckabee was able to hold his position and score a remarkable statewide win in Iowa.

Iowa Senator Chuck Grassley, a Republican who did not endorse a candidate, bluntly said after Huckabee beat Romney by 10 points that the victory of the former Arkansas governor could be attributed to "loyalty from evangelical Christians."

To Grassley's view, Huckabee's scripture-sampling campaign was a smooth "fit" with Iowa evangelicals -- both stylistically and emotionally.

But now the campaign moves to New Hampshire, a state where the religious right has never enjoyed a political foothold. New Hampshire Republicans are anti-tax and anti-government crusaders, but they have never been Christian crusaders.

They also vote in a primary, as opposed to caucuses that favor campaigns with committed supporters who are willing to give not just a vote but a full evening to the cause.

So the Huckabee campaign is retooling itself fast.

Suddenly, the "Christian leader" is just a "leader."

Huckabee arrived in New Hampshire Friday morning with new literature that drops the religious references used in Iowa and plans for a television advertising campaign that will eschew the crosses and fish that meant so much to his Iowa base.

Huckabee is nothing if not consistent. Sure, he losing the religious trappings that served him well in Iowa, but he's remaining every bit the crassly calculating and cynically manipulative politician that he has proven himself to be from the start of this campaign.
By John Nichols
Reprinted with permission from The Nation