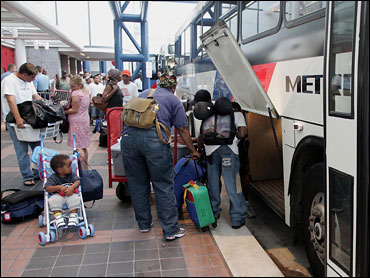 Hurricane Rita roared toward the Texas and Louisiana coasts early Friday, a major Category 4 storm that spurred a traffic-snarled exodus toward higher ground and fears it could cripple the heart of the nation's petrochemical industry.

Forecasters said it appeared Houston and Galveston could avoid a direct hit as Rita veered slightly to the east, threatening its 140-mph winds at the Beaumont and Port Arthur area about 75 miles east of Houston.

"I think I'm correct in saying it is the largest evacuation in Texas history," said Gov. Rick Perry.

A bus carrying elderly evacuees — and their oxygen bottles — caught fire on Interstate 45 near Dalls. At least one person was reported killed.

The unprecedented flight from the flood-prone Houston area left clogged highways at a near standstill, frustrating hundreds of thousands of people whose cars and tempers were overheating.

"It can't get much worse, 100 yards an hour," steamed Willie Bayer, 70, who was heading out of Houston and trying to get to Sulphur Springs in far northeast Texas. "It's frustrating bumper-to-bumper."

Houston's airport looked like the days before Thanksgiving and Christmas, reports CBS News Correspondent Peter King. Thousands without reservations waited for hours to learn they were out of luck.

The first rain bands were expected before nightfall Friday with the full fury of Rita expected into Saturday.

"We're going to see a storm surge of 15 to 20 feet and winds of over 100 mph," said CBS News Meteorologist George Cullen. "This is a huge storm, so hurricane-force winds extend out almost 80 miles from the center and tropical storm-force winds extend out 200 miles from the center, so we're going to have major impacts all along that Texas Louisiana coastline."

Two communities that may bear the brunt of the storm are Beaumont, which is a petrochemical, shipbuilding and port city of about 114,000; and Port Arthur, a city of about 58,000 that's home to industries including oil, shrimping and crawfishing.

Texas officials scrambled to reroute several inbound highways to accommodate outbound traffic, but many people were waiting so long they ran out of gas and were forced to park.

"We know you're out there," Houston Mayor Bill White said of the congestion that extended well into Louisiana. "We understand there's been fuel shortages."

Texas Army National Guard trucks were escorted by police to directly provide motorists with gasoline. The state was also working to get more than 200,000 gallons of gas to fuel-starved stations in the Houston area.

By Friday morning, the traffic was at least moving slowly, but was still backed up for about 100 miles.

"One of the big problems is the capacity up stream, the fact that people are stopping for gas slowing down things, pulling over to rest, getting something to eat," said Houston Police Chief Harold Hurrt Friday on CBS News' The Early Show. "Each time they take action, it has an adverse reaction on the traffic behind them."

Nearly 2 million people along the Texas and Louisiana coasts were urged to get out of the way of Rita, a storm that weakened Thursday from a top-of-the-scale Category 5 hurricane.

"Hopefully, we will get lucky and it goes into a part of Texas or Louisiana where there is not a lot of people or any buildings," Houston businessman Tillman Fertitta said.

At 5 a.m. EDT, Rita was centered about 290 miles southeast of Galveston and was moving to the west-northwest at near 9 mph. Its winds were near 140 mph, down from 175 mph earlier in the day.

Hurricane warnings were in effect from Port O'Connor, Texas, to Morgan City, La., and the National Hurricane Center forecast the storm would make landfall as a "dangerous hurricane of at least Category 3 intensity."

Tropical storm warnings also were in effect east and north to include New Orleans, still crippled by Hurricane Katrina. Rita's steady rains Thursday were the first since Katrina and the forecast was for 3 to 5 inches in the coming days — dangerously close to the amount engineers said could send floodwaters pouring back into recently dry neighborhoods.

Most residents aren't sticking around to see what happens, reports CBS News Correspondent Sharyn Alfonsi. The city is deserted and The soldiers and emergency workers who came to help are now retreating.

The Army Corps of Engineers added sandbags to shore up New Orleans' levees and installed 60-foot sections of metal across some of the city's canals to protect against storm surges.

The Texas and Louisiana coast is home to the nation's biggest concentration of oil refineries. Environmentalists warned of the possibility of a toxic spill from the 87 chemical plants and petroleum installations that represent more than one-fourth of U.S. refining capacity.

Petrochemical plants began shutting and hundreds of workers were evacuated from offshore oil rigs. Perry said state officials had been in contact with plants that are "taking appropriate procedures to safeguard their facilities."

The usually bustling tourist island of Galveston — rebuilt after as many as 12,000 people died in a 1900 hurricane — was all but abandoned, with at least 90 percent of its 58,000 residents cleared out.

The last major hurricane to strike the Houston area was Category-3 Alicia in 1983. It flooded downtown Houston, spawned 22 tornadoes and left 21 people dead. The U.S. mainland has not been hit by two Category 4 storms in the same year since 1915. Katrina came ashore Aug. 29 as a Category 4.

Even once the storm passes, the danger may not be over.

"It looks like this storm actually may stall out over northeastern Texas and basically sit there for a couple of days, and if that happens, we're going to see some areas along the western sections of Louisiana and the eastern areas of Texas get up to 20 inches of rain with massive flooding, almost what we saw four years ago in Houston when Tropical Storm Allison dumped over 25 inches of rain over the city," warned Cullen.

At Houston's Johnson Space Center, NASA evacuated its staff, powered down the computers at Mission Control and turned the international space station over to the Russian space agency.

Parts of Houston simply emptied out.

"I would say half of the city is gone, at least," Chief Hurrt told Early Show co-anchor Harry Smith.

"Katrina. It's scared everyone," said Dianna Soileau, 29, who was fleeing the refinery town of Texas City with her husband and two children. "We don't want to be the same thing."