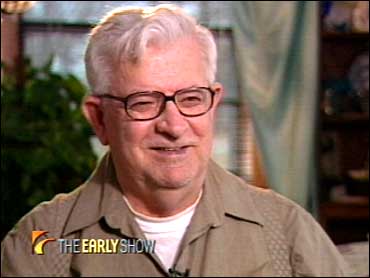 More often than not, CBS News Correspondent Steve Hartman ends up someplace where there's hardly anything but open space. That was particularly the case in Keota, Iowa. And as he flipped through the yellow pages, he was told there's no story there, either.

Jim Henderson was the person who answered the phone and convinced he had no story to tell. He suggested the reporter to make one up.

How simple a story can be.

He is 74 and nowadays, never goes anywhere without his old ball and chain, an oxygen tank he got attached to, after breathing construction dust his whole life. A retired contractor - Henderson and his wife Jenny have built a family of 6 kids and 16 grandkids -- all on the foundation of a 52-year marriage.

For his 50th anniversary, he said he "thought awhile" what he was going to give his wife. "Yeah, about ten minutes," which is just a hint of his dry sense of humor.

"Sometimes, I take him with a grain of salt," said Jenny Henderson.

Henderson told his wife he got her a place in the woods by a gentle stream. But when she opened the deed, it turned out for their anniversary, he got her a lot in the cemetery.

"This is the retirement," said Henderson.

"Yeah, there it is!" added Jenny laughing, standing on her new real estate property.

Clearly, either Jim Henderson has a lot more than oxygen pumping through his machine -- or he's at a pretty good place. And if you ask him how he can have such a pointed passion for life while tethered to such a blunt reminder of his own mortality, he'll show you a picture of his mom and dad and turn suddenly serious.

"You never realize the real advice you get from dad, do you? My father passed away from a heart attack, and I didn't realize how much advice I was going to lose," he said.

"That's one of 'em. Hi, Ben," he said proudly about his grandkid.

Today, Henderson is a full-time grandpa.

Duties include promoting breakaway lay-ups and harping on boy scouts to bring extra socks on campouts.

"Maybe some dumb little thing will rub off on those little guys. And if I can help, I want to bug 'em as long as I can," he said and he wants to do it at least 'til his 75th, he added.

"One way or another, we're going to celebrate it," he said.