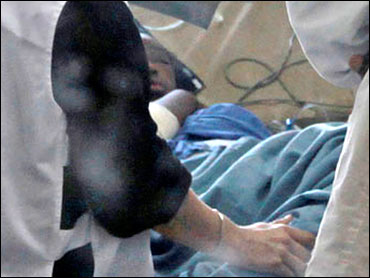 All medications, whether they are over-the-counter or prescription, suggest you read the label before taking them. Yet many people don't do this.

Skipping this step when you are trying to get well can actually make you sick. Dr. Mallika Marshall from WBZ-TV reviews drug safety on The Saturday Early Show.

Marshall notes that there is an assumption that drugs that are not prescription strength can't cause any problems -- but that is just not true. She recommends asking your doctor before taking any medication, making sure to mention any prescriptions you may be on.

She offers these additional tips:

Ask Doctor Before Stopping Prescriptions
Many people stop taking their medications as soon as they start feeling better. But that's not a good idea. The doctor has given you a prescribed dosage for a reason. So ask your doctor before you stop. If you stop taking the medication because it's bothering you, you can always ask the doctor for an alternative.

Take Medication With Water
You want to play it safe when taking your medications, so it's best to always wash your pills down with water. Some beverages such as grapefruit juice can lessen a drug's potency. Seltzer can have a similar effect. There can also be a problem with carbonated and hot beverages because they can break down the coating of the drug, releasing the medicines before they should be.

Fill All Prescriptions at the Same Pharmacy
Filling all your prescriptions at the same pharmacy is one of the best ways to avoid dangerous drug interactions. This way your pharmacist knows your complete pharmacological history and will know what is OK to give. The pharmacist can also offer up alternatives if a drug you are already taking will react negatively with a new prescription.

Here are some interactions to avoid with some popular drugs on the market:

Celebrex
Celebrex is a prescription drug that eases the pain of arthritis. It also helps with the pain from menstrual cramps. It's classified as a non-steroidal anti-inflammatory.

Avoid taking other drugs in the same class, such as ibuprofen. Failure to do so puts you at an increased risk of ulcer.

Lipitor
This is a very popular cholesterol-lowering drug.

Care should be taken if you are also on an immunosuppressive. The reason is this may cause muscle weakness and pain. Women on birth control pills may also want to avoid taking Lipitor. They could experience bloating and breast tenderness.

Premarin
Premarin is a drug taken by women to decrease the symptoms of menopause, which are caused by decreasing estrogen levels.

There are a couple of substances you'll want to be careful about ingesting if you are taking Premarin. The first is corticosteroids, which may increase side effects such as water retention. And Vitamin C when taken with Premarin may cause headaches and breast tenderness.

Zoloft
Zoloft is an antidepressant. It is also used to treat panic and obsessive-compulsive disorders.

If you are currently taking an MAO inhibitor, which is another type of antidepressant sold under names like Nardil or Parnate, you shouldn't use Zoloft within two weeks of starting or stopping the MAO. It could cause a spike in blood pressure, a sudden fever or even death.

Also avoid taking any blood thinners, which when used with Zoloft can cause abnormal bleeding. And certain migraine drugs when taken with Zoloft can raise blood pressure and lead to coordination problems.

Benadryl Allergy & Cold
This is a very popular over-the-counter remedy that relieves allergy symptoms such as a stuffy or runny nose and watery eyes.

Stay away from sedating medications to avoid over-tiredness.

Pepcid AC
Pepcid AC is the brand name for Famotidine and it relieves and prevents heartburn and indigestion.

Be careful when taking any over-the-counter antacids when taking Pepcid AC because they can reduce the drug's effectiveness.

Tylenol
Tylenol is one of the most common over-the-counter pain relievers. It is the brand name for acetaminophen.

Avoid taking it if you are already using blood thinners because it could cause abnormal bleeding.