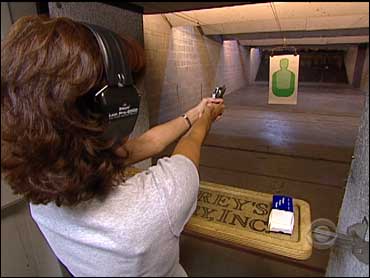 New gun laws are front and center in two states this summer. These laws don't restrict access to guns, but expand where residents can carry their weapons, even to their workplaces. CBS News correspondent Mark Strassmann reports on the legal showdown between gun rights and property rights that is about to take place in Federal Courts in Georgia and Florida.

Ann Stone is no Annie Oakley, just a Georgia mother, edgy about safety. So wherever she goes, she wants to take her .357 magnum.

"If there's a man that's going to attack me, there's nothing I can do personally, but if I have a gun, of course I can," Stone said.

Just this month, Georgia and Florida expanded state gun laws. People can now bring guns to work, so long as they leave them in their parked cars, joining gun owners in six other states with similar laws.

"They have the right to defend themselves and their families." said State Representative Tim Beardon, who wrote Georgia's new gun law.

"And it's about time that we started standing up for the innocent, law-abiding citizens instead of making excuses for the criminals all the time," Beardon said.

So, what's the worry? Guns within easy reach will lead to workplace shootings, some critics say. Just last month, a Kentucky plastics factory worker got angry, and got his gun in his car. He killed his supervisor, four co-workers, and then himself.

"It's that ready access to a firearm that frightens us," Levine said.

Levine is an executive with Brandsmart, an appliance chain in Georgia and Florida. Even this NRA member wants guns kept away from his stores.

"Our company has the right to make the rules," Levine said. "Same as in your house. You may tell people that come to visit you they are not allowed to bring a firearm in the house."

Georgia's new gun law has more sticking points: whether firearms belong inside restaurants that serve alcohol; public transportation; and even the world's busiest airport in Atlanta.

The issue is whether people can carry guns in the common areas -- from the parking lots right up to security checkpoints -- not beyond, Strassmann reports. But for now, get caught carrrying a gun anywhere inside this airport, and you're in for trouble.

Ben Decosta runs this airport and oversees its security.

"They need to know who the good guys and the bad guys are, and have no mistake about it," Decosta said.

He's fighting in court to keep guns out. Decosta says even an accidental discharge would cause bedlam.

"It doesn't make any sense to bring in dangerous weapons in with people who are civilian and untrained," Decosta said.

But, to Tim Bearden, it makes perfect sense.

"Property's great, but nothing's better than your life," Beardon said.

And to Ann Stone, that's what it's all about. Feeling like she's not a target for trouble.