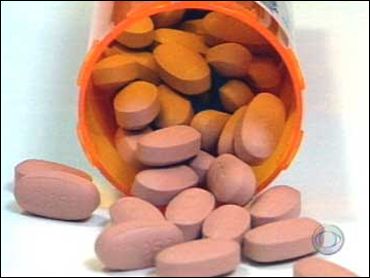 A class of very popular — and expensive — pain relievers are often prescribed when cheaper medications would likely be just as effective, contributing to rising health care costs, according to a new survey by Express Scripts Inc.

The drugs — Vioxx and Celebrex — are heralded for their ability to relieve pain without the gastrointestinal upsets of older, cheaper drugs like ibuprofen or naproxen. However, the study found that 76 percent of prescriptions written are for patients who show no risk of such side effects, calling into question the cost effectiveness of the medicines.

The study is part of Express Scripts report scheduled for release Tuesday, which found that its prescription drug costs rose 16.9 percent last year to an average of $592.05 per person. Express Scripts is a pharmacy benefit manager that provides coverage for 50 million people in numerous health plans.

Meanwhile, over the weekend, an editorial in The British Medical Journal resurrected criticisms previously raised in The Washington Post about the design of a clinical trial which found Celebrex was safer than ibuprofen or diclofenac because it caused fewer ulcers and ulcer complications.

Celebrex's manufacturer Pharmacia Inc. stands by its trial design. In fact, Pharmacia submitted the study to the Food and Drug Administration to have its label reflect what is says is a superior safety profile.

The study and editorial just add to the blistering debate over the use of the drugs, which many believe is being driven more by advertising than medical need. Last year, Vioxx was the most heavily advertised drug to consumers, with its manufacturer Merck & Co. spending $135 million to promote the medicine in the United States, according to IMS Health, a research firm.

Vioxx is the world's 10th-biggest selling medicine, registering $2.6 billion in revenues in 2001

Celebrex was the second most advertised drug in the United States with Pharmacia spending $130 million. Its sales totaled $3.1 billion, making it the seventh-biggest selling drug in the world. Bextra is Pharmacia's recent addition to the class of drugs known as Cox-2s and was introduced earlier this year and isn't included in the study. Vioxx and Celebrex were introduced in 1999.

"Any time there are new drugs on the market that are heavily advertised doctors and patients want to try them," said Raulo Frear, vice president of clinical services at Express Scripts.

But the study calls into question how much of the Cox-2 sales are medically necessary. For example, the study also found new users of the drug had consumed less than a 60 day supply of the medicine, a year after the initial prescription. That suggests the drugs are not being prescribed for conditions requiring long term therapy where the risk of gastrointestinal adverse events is of greatest concern. Side effects are most common in the elderly and people taking blood thinning medication or steroids.

Express Scripts couldn't say how much is spent on the drugs unnecessarily, but Fred Teitelbaum, the company's vice president for research and planning, said stricter use of the drugs could reduce costs by 75 percent.

Representatives from Merck and Pharmacia said it's better than to be safe than sorry when it comes to prescribing the Cox-2 because annually 100,000 people are hospitalized from adverse reactions to drugs like naproxen.

Earlier this year, the FDA allowed Merck to change Vioxx's label to say it is less likely to cause gastrointestinal side effects than naproxen. However, Vioxx's label also had to say that patients taking Vioxx had a higher incidence of heart attacks than those taking naproxen. There has been a debate over whether Vioxx can cause heat attacks or whether naproxen actually protects the heart.

Pharmacia's label can't claim the same stomach benefit as Vioxx although the FDA is considering allowing a change.

Regardless of the labels, health insurers are limiting use of Vioxx and Celebrex because of the cost.

For example, WellPoint Health Networks requires doctors to get prior approval for the prescriptions. Humana Inc. requires patients who want Vioxx or Celebrex to shell out a co-pay of $40 to $50 a month to discourage unnecessary use.