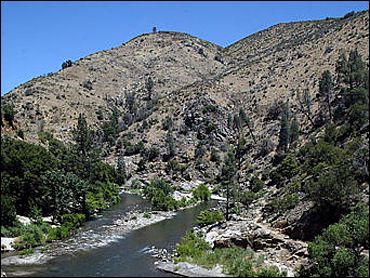 This summer why not hike to a historical site?

As part of The Early Show series, "The Best of America," Nick Heil, a senior editor with Outside magazine, introduces us to five nature adventures that follow the paths of historical figures or somehow have historical significance.

Some of the trails are simply day trips;others are better suited to the true outdoor enthusiast.

Bartram Trail, North Carolina
Between 1773 and 1777, naturalist and artist William Bartram rambled through the wilds of the Southeast, recording plants and animals in a classic travelogue simply called "Travels." Thisis the book that Jude Law clutches throughout the movie "Cold Mountain." Bartram is attributed to inspiring other important environmentalists such as Thoreau. Some 115 miles of Bartram's four-year journey are memorialized with this trail in far-western North Carolina.

It takes about two weeks to travel the whole route, but you can easily do smaller portions in a day. The trail climbs from the Georgia border into the Blue Ridge Mountains and eventually joins the Appalachian Trail. This is a rare opportunity to blend beautiful mountain vistas with history.

Grand Portage Trail, Minnesota
This is an eight-mile trail that connects the Pigeon River (which in turn connects to a whole series of waterways) and Lake Superior. For thousands of years, Native Americans, French traders and others would paddle their ways to this trail and then lug canoes, animal pelts and other goods to the what was then the headquarters of the region's most successful fur trade company, perched on the banks of Lake Superior.

Today, families can visit this same spot; the headquarters and surrounding buildings have been reconstructed and visitors can watch canoe building demonstrations, old-fashioned baking demonstrations and participate in other activities. The more adventurous can then hike the eight-mile Grand Portage Trail - which includes skirting a 120-foot tall waterfall - and camp along the the Pigeon River.

This is by far the most family-friendly hike on the list, thanks to the interactive portions of the trip and very short trail.

Lolo Trail, Idaho
This trail marks the toughest part of the Lewis and Clark Expedition. By the time the group had made it across the Bitterroot Mountains on the Lolo Trail, they had resorted to eating candles. But, because this stretch of terrain is practically impenetrable, it's one of the few places where Lewis and Clark's footsteps can still be seen. The trail passes through mountain grasslands and forests, and almost a dozen of the campsites used by Lewis and Clark.

The best way to see these sites is to sign up for a hike with Lewis and Clark Trail Adventures; the outfitters run one-, two- and three-day hikes along the Lolo. Guides point out historical points along the way and help you see the difficult decisions that Lewis and Clark faced along their journey.

The best part - many of the hikes are "supported," meaning someone else is carrying a portion of your gear and cooking your meals.

Ala Kahakai, Hawaii
This ancient trail (Ala Kahakai means Trail By The Sea) was only recently established. In 2000, Congress agreed to supply the funds needed to preserve and maintain the 175-mile series of old fishing paths along the Big Island shoreline. The entire trail will not be completed for some time; however, 15.4 miles are open to visitors now. When the entire trail is finished, Nick Heil says, it will be the flagship hike in the islands.

The trail takes you past sights that most tourists never see. Hike highlights include a mixture of cultural sites - a petroglyph field full of ancient rock carvings, fishing shrines, temples - and environmental sites. Specifically, you will experience an endangered ecosystem that is quickly disappearing from the islands - pools that are a mixture of fresh and salt water, which used to be the center of ancient village life. The trail ends at the border of Volcanos National Park.

Baboquivari Trail, Arizona
This is a rigorous day hike to the top of the Baboquivari peak. The peak is on an Indian reservation and holds special meaning to the indigenous people of the area. Native Americans considered the peak a sacred point; they believed that the mountain was home to a god, and climbing Baboquivari was as close as you could get to that god. The climb was truly a spiritual experience for these people, and hiking the path gives you first-hand experience of something that indigenous peoples considered central to their lives.

Additionally, Nick Heil says, the peak is truly spectacular because it's in one of more scenic regions of Southwest. During your ascent you'll see amazing panoramas; huge open-sky views that you don't find anywhere else.