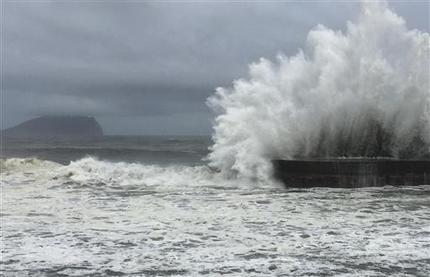 The fast-moving Typhoon Nepartak, packing maximum sustained winds of 220 kilometers (136 miles) per hour and gusts of 255 kph (158 mph), was blowing over the Philippine Sea with a large rain diameter of 650 kilometers (403 miles), according to the Philippine weather agency.

It is forecast to make landfall Friday morning south of Hualien city in eastern Taiwan. Big waves were already lashing the shore of nearby Ilan port city, where fishermen tightened their boats. Forecasters said waves of 1 to 7 meters (3 to 24 feet) could batter the coast, inland lakes and beachfront areas.

Restaurant owner Chen Mang-ning said he had to put a lock on the rolling door of his establishment to protect the windows from strong wind.

"Yes, I am worried about it, same as everyone here," said fisherman Chen Chun-po.

Hong Kong's two biggest airlines, Cathay Pacific Airways and Dragonair, said they were cancelling flights to and from Taiwan scheduled from Thursday evening to Friday afternoon as the storm bore down on the island.

Across the Luzon Strait, in the northern tip of the Philippines, authorities raised storm alerts in Batanes, about 700 kilometers (434 miles) north of Manila, and outlying islands in a sparsely-populated region.

The typhoon will not hit land there but will intensify seasonal southwest monsoon rains, which could spark thunderstorms and flash floods on the main northern Luzon island, said government forecaster Aldzar Aurelio. Some domestic flights were canceled in the northern Philippines.

Nepartak is a Micronesian word for a local warrior.

In November 2013, Typhoon Haiyan struck the central Philippines with ferocious power, leaving more than 7,300 people dead and missing and displacing more than 5 million others after leveling entire villages.