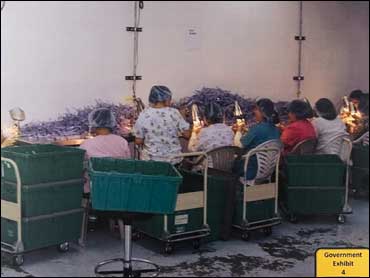 A North Carolina company is accused of bypassing sterilization tests for medical syringes in a cost-cutting move prosecutors say sickened hundreds of patients and led to five deaths.

U.S. Attorney George Holding said Tuesday that federal authorities have launched an international search for the executive charged with rushing shipments of bacteria contaminated syringes from an AM2PAT Inc. plant. Two former plant workers who provided prosecutors details about the plant's operations have pleaded guilty for their roles in shipping tainted syringes.

The syringes contained Heparin, a blood thinner, and saline, and were recalled in December 2007 after an outbreak of illnesses. Health inspectors identified bacterial infections in Colorado, Texas, Illinois and Florida.

Heparin and saline are used to flush intravenous lines during cancer treatments, kidney dialysis and other procedures.

"Our office is committed to pursuing him and bringing him here to account for his actions," Holding said. "We're putting all resources available to bringing him back here."

Holding did not know who Patel's attorney was.

AM2PAT is based in Chicago and had a subsidiary in North Carolina.

Patel's company sold nearly $7 million worth of heparin and saline syringes in 2006-07. Prosecutors said the facility in Angier, about 20 miles south of Raleigh, cut corners and failed to follow rules for checking sterility. They also said manufacturing dates were falsified to make it appear that safeguards were followed.

The scheme led to bacterial infections in 200 to 300 patients around the country, some of them resulting in spinal meningitis and permanent brain damages, prosecutors said. Even more people may have become infected.

"One of the worst things about this case is that the people who were taking saline and heparin, they're usually sick already or have some debilitative illness and need these medicines to try to get well," Holding said. "Sometimes it's hard to determine whether they were killed from the tainted heparin or whether it was the original illness. We're not able to say any more than five."

Patel said about a year ago when federal officials were investigating the outbreak that company voluntarily recalled the implicated syringes and there was "nothing out there anymore."

Plant manager Aniruddha Patel, 43, of Carpentersville, Ill., and quality control director Ravindra Kumar Sharma, 54, of Richmond, Va., each were sentenced Monday in U.S. District Court in Raleigh to 4½ years in prison for fraud and allowing tainted drugs into the marketplace.