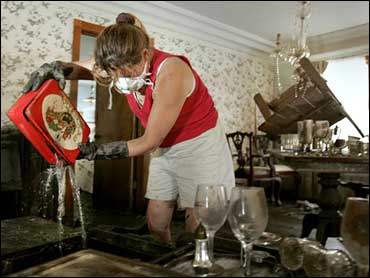 Most areas of New Orleans are clear of bacteria-laden floodwaters, but residents and business owners are coming home to the stench of garbage, undrinkable tap water and a broken sewage system.

Roads are littered with downed branches and broken-down cars that were flooded by Hurricane Katrina a month ago. Stretches of the city are pitch-black at night and homeowners are finding moldy walls and refrigerators oozing foul-smelling liquid.

Meanwhile, the Army Corps of Engineers pumped many of the remaining floodwaters out of the city Saturday as tens of thousands of residents continued returning to dry neighborhoods to check on houses and reopen businesses. Officials expected the pumping to be completed by the middle of next week.

As the French Quarter and other neighborhoods that were spared Katrina's worst officially reopened Friday, residents came back to their homes and businesses to rebuild their lives.

CBS News correspondnet Joie Chen reports that the first to return took on ugly jobs. With only one employee back to help him, Igor Margan spent days clearing rotten food from his five restaurants.

"I put, my guess, about 20 gallons of bleach in each location just to get rid of the flies," Margan told Chen.

Others just packed up and left.

"We're moving out of this stinking city," Billy Tassin snarled as he loaded his daughter's belongings into a truck, a day after finding his home fouled with knee-deep mud. "They can finish destroying it and burning it down without us."

Despite the misgivings of state and federal authorities, Mayor Nagin opened the French Quarter and the Uptown section as part of an aggressive plan to get the city back on its feet. Algiers, a neighborhood across the Mississippi River from the French Quarter, reopened to residents on Monday.

However, the return of residents is slower than expected. Friday's flow was more of a trickle, despite the re-opening of several districts that had only light to moderate damage.

Altogether, the neighborhoods account for about one-third of New Orleans' half-million inhabitants. Most of the reopened areas have electricity, but only Algiers has drinkable water.

At the Red-Thread dressmaker's shop on Magazine Street, Ilona Toth wept as she began packing up to leave 15 years after opening her business.

"It's just too hard," said Toth, a Hungarian immigrant. "Every year a hurricane is always coming. We always have to evacuate, then clean up. It's too much trouble."

Others were intent on coming back.

"This is my home. I will never leave New Orleans," said Virginia Darmstadter, 75, who has lived in the Uptown section's Garden District for 21 years and left her husband in a Houston nursing home to check their drenched home, which had no electricity.

Debris was stacked outside homes for miles, and included moldy mattresses and rows of refrigerators, duct-taped shut and leaking smelly liquids. Burglar alarms sounded in many buildings as the power blinked on, a sharp counterpoint to the wood chippers grinding up fallen limbs.

CBS News correspondent Sharyn Alfonsi reports that the people returning to New Orleans Friday seemed to be safe, because it appeared that the police, federal officials, the army, and the National Guard outnumbered residents.

Along Prytania Street in the Uptown section, people cleared brush and tree limbs from their yards, while repair crews worked on power lines.

Taylor Livingston, 40, was using a leaf-blower, hoping to create a lived-in look at three homes he was guarding against looters.

"I don't know how it's going to come together," he said. "I don't know if there's ever been a big city evacuated the way we were evacuated. It's all new. I don't know that we can come back that quick."

Although the mayor hand-picked a team of movers and shakers to figure out the city's future, some worry about Louisiana's history of political corruption, reports Chen.

"I mean no unkindness to Mayor Nagin because so far I don't know that there's been any casting of suspicion on his regime," said resident John Ernst. "I think it's always something to worry about."

The mayor said he has e-mailed the White House outlining his top priorities, including rebuilding and improving the levee system; seeking help with a rail link to Baton Rouge that could be used for emergency evacuation; and getting federal tax breaks and incentives for businesses and residents.

"New Orleans is not asking for a handout; we're asking for a hand up," Nagin said. The Louisiana congressional delegation has called for $250 billion in federal aid to help the state recover from hurricane damage.