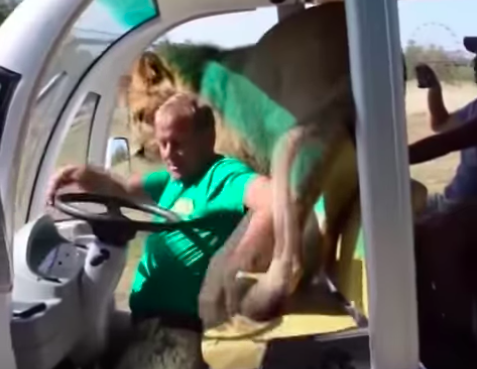 People head to safari parks to get up close and personal with animals usually seen only in photos. But, these tourists got a bit too close to a lion when it climbed right into their safari vehicle.

A video released by Taigan Safari Park in Vilnohirsk, Crimea, shows the surprising moment a lion hops into an open-air safari vehicle with tourists.

The footage shows the lion named Filya climbing over people sitting in rows in the car and then licking them, reports APTN. The lion even appeared to attempt to cuddle with the tourists in the vehicle.

Some can be seen taking photos with selfie sticks and laughing, while one woman appeared to be frightened and hops out of the car.

The man in the green shirt driving the vehicle is the park owner, Oleg Zubkov, known as the "lion whisperer," according to the Daily Mail.

The moment occurred eight weeks after a woman said she was attacked by a different lion named Vitya in the Taigan Safari Park, according to the Daily Mail. Olga Solomina, said Vitya "bit through my right arm and used it to drag me - it like a puppet."

The park is famous for offering tourists very close interactions with the giant cats.