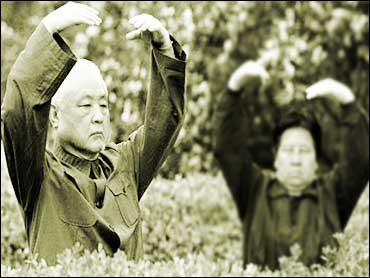 Tai chi, a type of exercise that guides the body through gentle, flowing poses, may help some of the worst physical problems of Parkinson's disease, a new study shows.

If further studies confirm the findings, experts say it appears that tai chi might be an effective therapy for improving a person's ability to walk, move steadily, and balance. Tai chi may also reduce the chances of a fall.

"The results from this study are quite impressive," says Ray Dorsey, MD, MBA, a neurologist and associate professor at Johns Hopkins School of Medicine in Baltimore.

"It's always difficult to compare results across studies, but the magnitude of the impact that they had is larger, in some cases, than what is seen with medications in Parkinson's," says Dorsey, who also directs the Movement Disorders Center and Neurology Telemedicine at Johns Hopkins. He was not involved in the research.

Parkinson's disease involves the slow destruction of brain cells that make a chemical called dopamine. Nerve cells depend on dopamine to send messages that guide muscle movement. As the cells die, movements may become shaky, stiff, and unbalanced. Walking may be harder. It may also be tougher to start a movement or keep going.

Medications may help control some things, like tremors, but many drugs are not as good at helping the so-called axial symptoms of Parkinson's disease, which include problems with balance and walking.

For the study, doctors assigned 195 people with mild-to-moderate Parkinson's disease to one of three groups: The first took tai chi classes, the second exercised with weights, and the third was assigned to a program of seated stretching. All the groups met for 60-minute sessions twice each week.

After six months, people who had been taking tai chi were able to lean farther forward or backward without stumbling or falling compared to those who had been doing resistance training or stretching. They were also better able to smoothly direct their movements. And they were able to take longer strides than people in the other two groups.

Perhaps the most impressive benefit of tai chi, however, was related to falls. Falls are common in people with Parkinson's, and they can cause serious injuries, including fractures and concussions. Studies show falls are the main cause of hospitalizations in Parkinson's patients. People in the tai chi group reported half the number of falls compared to those who were taking resistance training and two-thirds fewer falls than people who were doing light stretching exercises.

The research is published in the New England Journal of Medicine.

"This is a very encouraging study," says Chenchen Wang, MD, Msc, a rheumatologist and associate professor at Tufts University School of Medicine in Boston.

Wang has studied the benefits of tai chi for osteoarthritis and fibromyalgia, but she was not involved in the current research.

"Most of our previous studies have measured pain, depression, and anxiety, which are subjective measures. These results are very impressive because they used objective measurements," Wang tells WebMD.

It's not clear exactly why tai chi may offer an edge over more conventional kinds of exercise like resistance training, but researchers say they believe it probably has something to do with the mind-body connection that's encouraged throughout the poses.

"It's intentional movement. So every step you take, you are aware of it. We put quite a bit of emphasis on the self-awareness of the movement," says Fuzhong Li, PhD, senior scientist at the Oregon Research Institute, a nonprofit center for the study of human behavior in Eugene, Ore.

Additionally, Li says, tai chi has some practical advantages over other kinds of exercise.

"You don't need any equipment. You can practice anywhere, anytime. It's low cost. It can easily be incorporated into the rehab setting, as well," Li says.