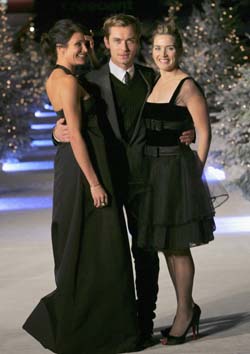 The Tagi alliance completed what it had set out to do several weeks ago: banish all members of the Pagong tribe from the Survivor island.

Colleen Haskell, the bubbly, 23-year-old advertising student and last member of Pagong, was voted off the island in Wednesday's episode after some last minute deal-making by most of the remaining members of the original Tagi tribe.

After struggling to win immunity for more than two and a half hours with Kelly in a balancing battle on a wobbly beam, Colleen made one small mistake and fell in the water - exposing herself to the Tagi wrath.

"It was all of them against me. I had little chance," Colleen said Thursday morning. "They have known each other longer and had their thing going. They had been talking and making deals. So it was a good chance I was going. I wasn't surprised."

The Miami Beach college student admitted the opposing tribe organized their strategy better than her own Pagong colleagues after the two groups joined into one large tribe - Rattana.

"They played the game ten times better," she said. "Gretchen is against alliances, which is great, and Greg is against the show. Then you have the three of us who are scrambling around trying to do something with what we're left with."

Colleen laughed at the suggestion she was involved with fellow Pagong member Greg in a romantic relationship, which was highlighted early in the series.

"Look at the footage - it's us talking and they have us whispering," Colleen said with a big smile. "We didn't have the theme music when we're walking down the beach. When you put that on, it's a big romantic moment."

"(After) all the talk about it, I wish something happened. What a waste."

But she agreed that forgoing anything closer than just a friendship saved her and Greg from getting early banishment.

"I'm glad it didn't happen because in the game you would have been booted immediately. It would have caused too much tension," she said.

Leaving the island when she did proved beneficial to Colleen, who suffered from severe bug bites on both legs that she continuously scratched open.

"He was helping. He would give me big words. I was like, 'That helps,'" Colleen said jokingly.

Although the bites were left untreated for several weeks, once she left the island she received medical attention from a doctor.

"A doctor stopped by (during the first weeks) ... because they were concerned," she said. "I think if I hadn't gotten kicked off, something would have been done the next week. But since I was kicked off, I got to go to a doctor like the next day."

Having successfully casted off all members of the agong tribe, the five members of Tagi - Rudy, Rich, Kelly, Susan and Sean - will now have to restructure personal strategies to survive and collect the $1 million prize.