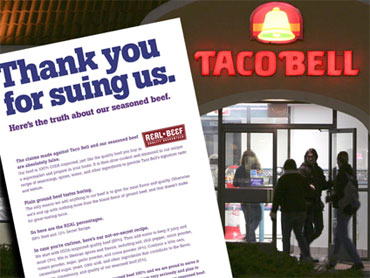 LOUISVILLE, Ky. - An Alabama-based law firm said Monday it has withdrawn its class-action lawsuit that sought to force Taco Bell to stop calling the meat it serves "beef."

The lawsuit, filed in January in federal court in California, alleged that what Taco Bell calls "seasoned beef" is a meat mixture that has binders and extenders and does not meet federal requirements to be labeled beef.

The fast-food chain said Monday the allegations were "absolutely wrong" and the lawsuit was voluntarily withdrawn by the firm. It said no money was exchanged and it is not changing any of its products or advertising.

"This sets the record straight about the high quality of our seasoned beef and the integrity of our advertising," Taco Bell CEO Greg Creed said in an interview. "We took great exception to the false claims made about our seasoned beef and wish the attorneys had contacted us before filing and publicizing a lawsuit that disparaged our brand."

Law firm Beasley Allen, based in Montgomery, Ala., said that it withdrew the lawsuit after Taco Bell made changes to its marketing and product disclosure.

"From the inception of this case, we stated that if Taco Bell would make certain changes regarding disclosure and marketing of its `seasoned beef' product, the case could be dismissed," attorney Dee Miles said in a statement.

In response to the lawsuit, Taco Bell took out full-page ads in at least nine major newspapers, aired television spots and launched a YouTube campaign to proclaim its taco filling is 88 percent beef.

It spent between $3 million and $4 million in advertising to counter the accusations made in the lawsuit, Creed said.

He said he could not comment on any financial fallout for the fast-food company as a result from the lawsuit because of an "earnings blackout." Taco Bell's parent company, Louisville-based Yum Brands Inc., reports its quarterly earnings on Wednesday.

Yum Brands is also the parent of Pizza Hut and KFC.