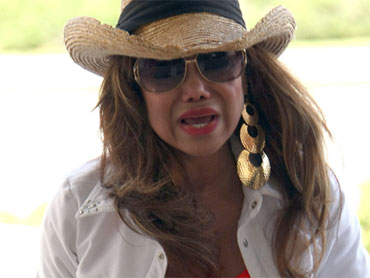 LONDON (CBS/AP) "He was worth more dead than alive."

That's what Michael Jackson's sister, LaToya Jackson, said to two British Sunday newspapers, as she believes her brother was murdered by a group of conspirators trying to get hold of his fortune.

LaToya Jackson said she knows who is responsible for her brother's death and is determined to see them brought to justice, the News of the World reported.

"I know who did it and I won't rest until I nail them," she reportedly told the News of the World.

According to the published interviews with The News of the World and The Mail on Sunday, she did not name any of the people she believes were involved and did not offer any evidence to support her claim that foul play was involved in the singer's sudden death on June 25.

"I feel it was all about money," she was quoted as saying by the News of the World. "Michael was worth well over a billion in music publishing assets and somebody killed him for that."

She reportedly said the conspirators used powerful prescription drugs to keep Michael Jackson submissive and under control and also kept him away from his family.

She also claimed, the newspapers reported, that roughly $2 million (1.23 million pounds) worth of cash and jewelry was taken from Michael Jackson's rented mansion and has not been accounted for.

LaToya Jackson also was quoted as saying her brother did not want to perform the 50 London shows he had agreed to, but was pressured into that agreement.

The shows, to mark Michael Jackson's return to concert performing, had been scheduled to begin Monday at London's 02 Arena.

Officials are waiting for the return of toxicology reports before determining the cause of Michael Jackson's death.