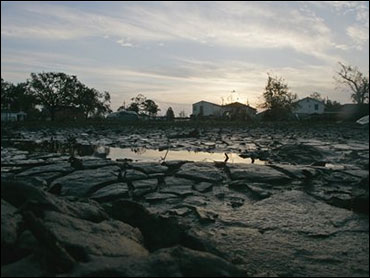 Competing on Survivor: Marquesas is a lot like being in jail, says award- winning crime writer Tammy Leitner who was the 10th - and latest - contestant to be voted off the reality TV show.

In an interview Friday morning with Jane Clayson, co-anchor of The Early Show, Leitner, who spent time in jail for a newspaper story she had written in Arizona, said it was a lot like playing a game of Survivor.

“Well, in both cases you can’t leave,” she said. “You're stuck with a bunch of people who you're not sure if they're lying or telling you the truth and food is always an issue.”

Leitner, who describes herself as being "super competitive" was mad that she was voted off, but not surprised. "I was definitely marked to go. I just didn't need to hear it."

And she didn't even wave goodbye after tribal council. "I had my game face on since day one and I wasn't going to let them off the hook and think was okay to vote me out."

Leitner had won the last two immunity challenges, but said, "I was on the chopping block. As soon as John was voted out I knew that I was the next to go."

She went on to say that after Robert "The General" DeCanio won the latest immunity challenge, he whispered in her ear that he was going to give her immunity, but that she told him to keep it - he had earned it.

Clayson noted that apparently little Neleh Dennis wasn't as innocent as everyone thought.

Leitner agreed. "Neleh is adorable and she's very sweet on the exterior, but on the interior, she's a little schemer. She's playing that game."

And she was not happy with Neleh's offer of a used mint after the reward challenge. "That was just painful to watch. You know, at that point I was trying really hard to keep my mouth shut and just not cause waves, because I knew that I was going to go and make things worse. But I just wanted to take that mint and shove it down her throat. 'What are you doing? It's a used mint.'"

Leitner wasn't a big fan of Zoe Zanidakis either. "Any time you put two strong women on the same team there's bound to be conflict. And even though we were in the same alliance, we never really talked when we were out there. We didn't have hardly any conversations and the one conversation we did have, the whole world saw. It was ugly and it got really personal. I was very upset with her."

She described scheming Sean as a "cornucopia of intestinal problems." Leitner added, "Sean's a great guy and we got along very well in the game. But he had a lot of stomach problems and he always told us about them. Or you figured it out…"

Asked if she or Robert had approached Sean or Vecepia to vote off Neleh, Leitner admitted, "That was a little bit painful to watch. You can't help but go 'what if?' I had actually approached Veceptia a few days prior and just kink of felt her out. I never said do you want to form an alliance again. But I just wanted to see if she might switch sides and she wasn't ready to do so."

Leitner was asked what she had gotten out of the game.

"I took away something that I didn't expect to take away from this experience. As a journalist, you know, our job is to sit back and observe, and usually you don't want show your emotions on your face. If you're sitting there interviewing a murderer, you don't want him to know you're thinking. Unfortunately I took a lot of my journalism skills as a crime reporter out to the island. I didn't open myself up. I didn't show my emotions. I mean on day 28 Kathy said to me 'I don't know who you are. You haven't opened up to me at all.' And I realized it's okay to not be as tough, always. It's okay to show your emotions once in a while and to let people in. So I feel like I got something really valuable out of this experience."