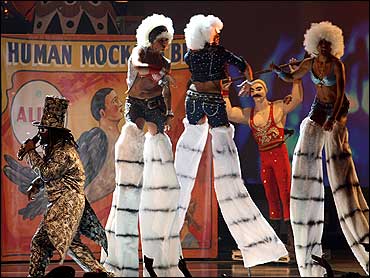 T-Pain transformed the BET Awards into a circus Tuesday with a multi-artist medley that showed the rapper and singer's wide-ranging influence on urban music.

Wearing a spangled top hat, T-Pain - nominated for a leading five BET Awards - shared the stage with fellow nominees Flo Rida, Rick Ross, Ludacris and Big Boi, along with a bevy of big-top freaks, including fire eaters and acrobats.

"This industry is my circus," said T-Pain. "Ride with the ringleader."

Then T-Pain - whose nominations came not for his own hits but for his collaborations with others, and whose vocoder-assisted voice is among the most ubiquitous in urban music - gave a sample of his musical assists over the past year.

Double nominee Flo Rida performed his hit with T-Pain, "Low"; a bare-chested Ross flaunted his gut while singing his song with T-Pain, "Boss"; and all joined in on the collaborative "I'm So Hood."

Not to be outdone, the ladies offered a showstopping performance of their own, led by double nominee Alicia Keys. Rocking a sleek bob and skintight jeans, Keys invited vintage girl groups SWV, En Vogue and TLC to join her onstage for a medley of their biggest hits. By the time they closed with TLC's "Waterfalls," the crowd at the Shrine Auditorium was on its feet. Even Kanye West was singing along.

"This performance was surreal," SWV's Leanne Lyons said backstage. "When we got the call that Alicia Keys was one of our biggest fans and that she wanted one of her favorite groups from the '90s to perform with her, it humbled us. She shared the stage. She's not ego tripping."

Kanye West won two awards: best male hip-hop artist and best collaboration for "Good Life," his song with T-Pain. And unlike past award shows, he didn't use his appearance to boost himself - at least that much. Instead, he praised T-Pain, calling him "a genius."

"We're blessed to be in this man's presence," West said. "I'll let y'all know because I'm one of the kings of this game. My opinion counts."

"You scared me man," West said. "Congratulations on selling over a million records. And they say hip hop is dead."

A somber moment came when UGK was named best group. Bun B honored his fallen bandmate, Pimp C, who died in December at age 33 from complications of sleep apnea.

"It's hard to do this with my brother not being here," Bun B said, while joined onstage with Pimp C's wife. "We want to thank y'all for supporting UGK all these years. It's still UGK for life... Long live Pimp C."

Usher opened the show with a bang - literally.

Pyrotechnics filled the auditorium as the singer performed "Love in this Club" from his latest album, "Here I Stand." The highly choreographed set, which featured Usher pop-locking, gyrating and grooving his way across the stage with a bevy of voluptuous dancers, gave the show a high-energy start.

Singer (and BET reality star) Keyshia Cole gave a glamorous performance of her ballad "Heaven Sent," descending from the ceiling while wearing a long flowing gown, before a dancer ripped it off, revealing a white top and shorts as she sang her hit "Let It Go" with Lil Kim.

West rapped alongside Young Jeezy in performance that was marked by its omissions - censors muted much of their performance. Chris Brown, who was seated next to rumored girlfriend Rihanna, won the night's first award: best male R&B artist.

The 19-year-old crooner thanked "my mom, God, everybody. If I leave y'all out, I'm sorry."

Brown was joined onstage by Ciara for a sizzling performance that showed off each artist's dance skills.

Kobe Bryant and Missy Elliott were other early winners, but the best male athlete and female hip-hop artist weren't there to collect their awards, nor was the evening's best new artist winner, The-Dream.