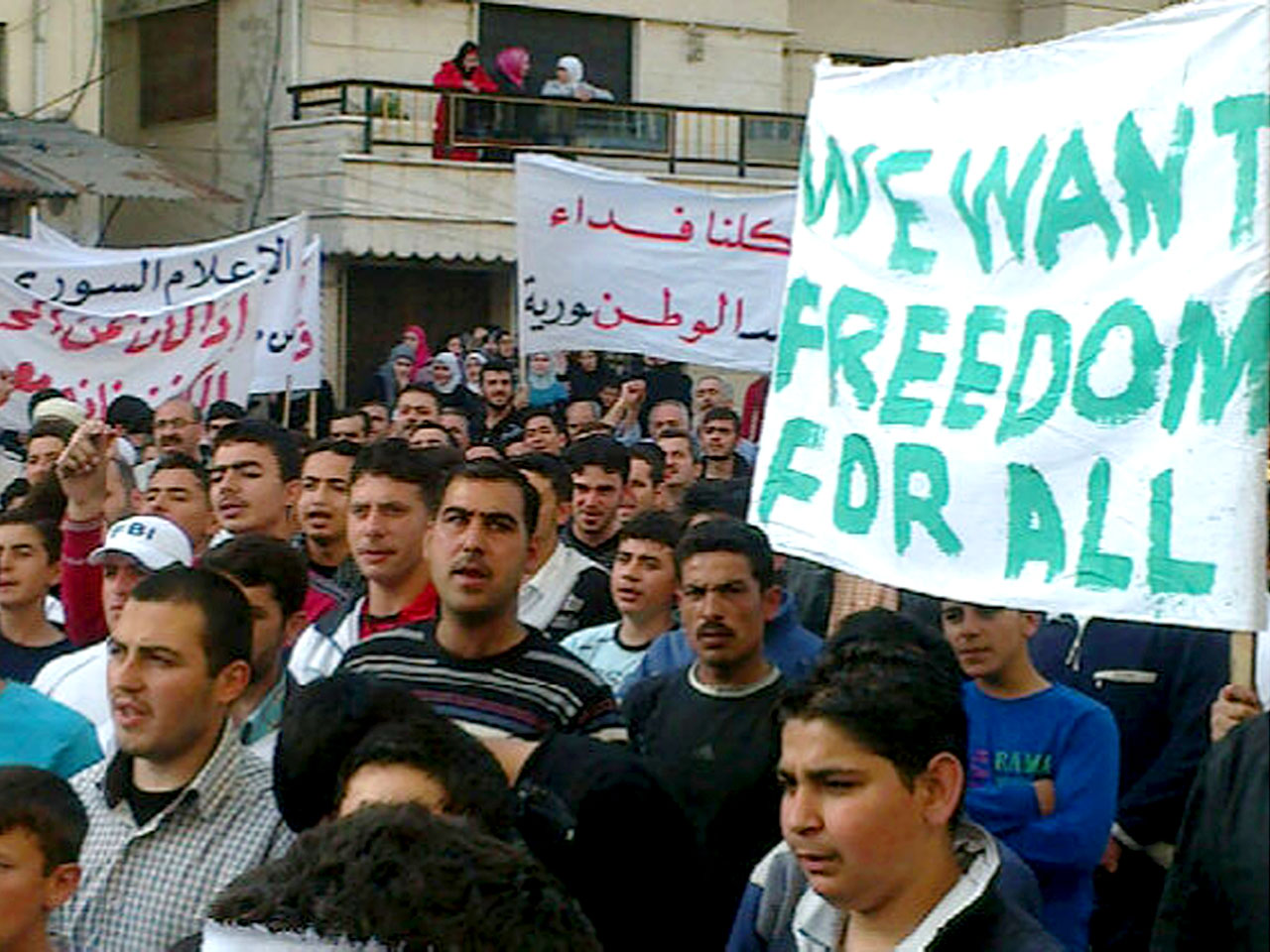 BEIRUT — Gunmen opened fire during a funeral for a slain anti-government protester Sunday, killing at least three people on a day when tens of thousands of people took to the streets nationwide as part of an uprising against the country's authoritarian regime, witnesses and activists said.

It was not immediately clear who was behind the shooting at the funeral near Homs, 100 miles from the capital, Damascus.

In the past four weeks, Syrian security forces in uniforms and plainclothes have launched a deadly crackdown on demonstrations, killing at least 200 people, according to human rights groups. The government has blamed armed gangs looking to stir up unrest for many of the killings.

One witness said gunmen wearing black clothes opened fire at hundreds of people in the Talbiseh district in central Syria at a funeral for a protester who was killed Saturday. Other witnesses said they saw soldiers and security forces open fire, shooting even at homes and balconies. Dozens were wounded, they said.

A human rights activist in Damascus confirmed the three deaths, but said he had no information on who killed them. He confirmed the deaths through witnesses on the ground who saw the killings and gave him the names of the dead.

The witnesses and the activist requested anonymity for fear of reprisals from the government.

Syria's state-run news agency later said one policeman was killed and 11 other policemen and security personnel were wounded when an "armed criminal gang" opened fire on them in Talbiseh. It said the gang opened fire randomly, shutting down main streets and terrorizing residents.

The killings were bound to increase pressure on President Bashar Assad, who has tried to quell the popular uprising with a mixture of brute force and concessions.

On Saturday, he promised to end nearly 50 years of emergency rule this week, a key demand of the protesters.

But despite Assad's promises, the protest movement has grown and become much bolder. Many protesters say they will settle for nothing less than the downfall of the regime, driven by outrage over the crackdown.

On Sunday, tens of thousands of people waving Syrian flags and shouting "We want freedom!" took to the streets across Syria, brushing off Assad's attempts to calm things down.

"It's too late for their promises," said Bayan Bayati, a 22-year-old Arabic literature student who was among 20,000 people who turned out Sunday in the town of Banias. Other large gatherings were reported in the southern city of Daraa, which has become an epicenter of the movement, and the suburbs of Damascus.

The witness accounts could not be independently confirmed because Syria has placed tight restrictions on media outlets and expelled foreign journalists.

Threats to Assad's iron rule would have major regional repercussions, jeopardizing a key component to Iran's sphere of influence in the Middle East. The two countries work together to arm the Shiite militant group Hezbollah in Lebanon and Hamas in the Palestinian territories — groups considered terrorists by Israel and the United States.

There also are some fears in the region, particularly from Sunni counterweight Saudi Arabia, that Iran is quietly backing Shiite-led protest movements across the region, in places such as Bahrain and Yemen.

The Obama administration said last week that Iran appears to be helping Syria crack down on protesters, calling it a troubling example of Iranian meddling in the region. Syria denied the charge.

Assad said Saturday the emergency laws will be lifted this coming week, a key demand of protesters. Syria's widely despised emergency laws have been in place since the ruling Baath Party came to power in 1963, giving the regime a free hand to arrest people without charge and extending state authority into virtually every aspect of life.

But he warned there will no longer be "an excuse" for organizing protests once Syria lifts emergency rule and implements reforms, which he said will include a new law allowing the formation of political parties.

Sunday's protests suggest his gestures have fallen short of satisfying the growing demands. There was also concern that Assad will replace the emergency laws with equally harsh restrictions on public expression.

The biggest demonstrations in Syria on Sunday were in Daraa and the coastal town of Banias.

Witnesses reached by telephone said tens of thousands of people were marching in Daraa, shouting "Whoever kills his own people is a traitor!" Others shouted "The people want to topple the regime," which was the rallying cry during protests in Egypt and Tunisia that ousted the countries' longtime leaders.

In Banias, witnesses said up to 20,000 people took to the streets, outraged over a raid by security forces last week and the brief detention of hundreds of its young men. At least five people were killed in the violence.

"They have humiliated us. They took away our men," said Bayati, the literature student. She said the bullets used on protesters would have been better used to "liberate the Golan Heights" — which Israel captured in the 1967 Mideast War.

In the town of Suweida, near Daraa, security forces beat protesters with batons, injuring several of them. The gathering drew about 300 people, witnesses said. Activists also said a large demonstration was taking place in the Damascus suburb of Douma, but calls to the town were not going through.

The demonstrations come despite promises by Assad to end the widely despised state of emergency rule by next week at the latest, and implement other reforms.

But he coupled his concession with a stern warning that further unrest will be considered sabotage.

Assad says armed gangs and a "foreign conspiracy" are behind the unrest, not true reform-seekers.