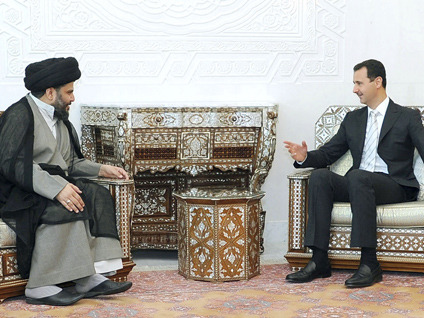 Syrian President Bashar Al-Assad on Saturday told Iraqi radical Shiite cleric Muqtada al-Sadr, who resides primarily in Iran, that Iraqi leaders should immediately form a national government to depart away from troubles in the neighboring country.

"Assad underlined Syria's full support to the formation of the Iraqi cabinet as soon as possible to realize Iraqi people's interest, expressing hope over reaching a unified stance between the Iraqi political forces to form a national government that could achieve stability and security in Iraq," said an official statement by the Presidential palace.

"Any delay in forming the government would be reflected negatively on the situation in Iraq," Assad told Sadr, who was making a rare trip abroad for talks on the stalemate in Baghdad.

The bloc of anti-U.S. cleric Sadr gained 39 seats in the new 325-strong parliament, against 91 for Allawi and 89 for Maliki — both Shiite Muslims.

Initially Sadr was opposed to the return of Maliki as prime minister but in May he said he would remove his objection under certain conditions.

Home to about a million Iraqis refugees, including supporters of the previous regime, Syria has long had influence on events in Iraq.

Several Iraqi officials have visited Syria during the past few months, including Ammar al-Hakim, leader of the Islamic Supreme Council of Iraq; Ayad Allawi, leader of the Iraqi National Movement; Vice President Adel Abdul-Mahdi; and Ayad al-Samarrai, chairman of the Iraqi Accord Front.

Sadr's visit to Syria comes after Iraqi legislators on Monday extended an inaugural parliamentary session by two weeks to give political leaders a chance to form a government.

"The meeting also dealt with the brotherly relations binding the people of Syria and Iraq, as al Sadr expressed Iraqi people's appreciation of Syria's stances, which has hosted the Iraqis since the U.S. invasion of the country and still supports them and seeks stability and security of Iraq," according to the statement, carried by the state-run news agency.