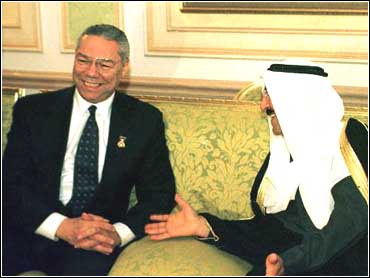 Secretary of State Colin Powell finished a quick trip to the Middle East by meeting Syrian President Bashar Assad and extracting a promise that Syria would bring a pipeline to Iraq under the U.N. sanctions regime.

That even though Powell plans to suggest a change in U.S. sanctions policy allowing civilian goods to flow more freely to Saddam Hussein's command, according to a senior U.S. official.

Powell, on his first Middle East visit since taking office in January, had already visited Egypt, Israel, Palestinian self-rule areas, Jordan and Kuwait. After the talks he left Damascus heading for Brussels.

Syria has said the pipeline is open for tests, but industry sources say it has been pumping about 100,000 barrels of Iraqi oil a day since November, bypassing the U.N. system and paying revenues straight into Baghdad's pocket.

A Syrian presidential spokesman said Assad had called during the meeting for an "effective and neutral" U.S. role in the peace process and stressed that peace would ensure security and stability in the region.

He said Assad affirmed Syria's commitment to the peace negotiations, which should be based U.N. resolutions and the principle of land for peace.

The Syria media, in advance of Powell's arrival, accused the Bush administration of a "double standard," leaning heavily on Iraq while declining to get tough with Isael.

Powell is trying to persuade the Arabs to maintain U.N. sanctions on Iraq. But he is running into complaints the Iraqi people are suffering as a result of the economic restraints.

The official Saudi Press Agency quoted Prince Saud as saying the two sides had agreed "on the need to review sanctions imposed against Iraq and to find a way to end the suffering of the Iraqi people while ensuring the Iraqi regime's compliance with Security Council resolutions."

Powell found this concern echoed by other Arab leaders in his first extensive trip to the region and will suggest the modifications to Mr. Bush after he returns home Tuesday night, said the senior U.S. official, speaking on condition of anonymity.

Still, a decision may take some time, although the aim is to reach one before an Arab summit scheduled for late March in Jordan.

Iraqi officials also were holding talks Monday and Tuesday at the United Nations to make plea for ending economic sanctions.

©MMI Viacom Internet Services Inc. All Rights Reserved. This material may not be published, broadcast, rewritten, or redistributed. The Associated Press and Retuers Ltd. contributed to this report