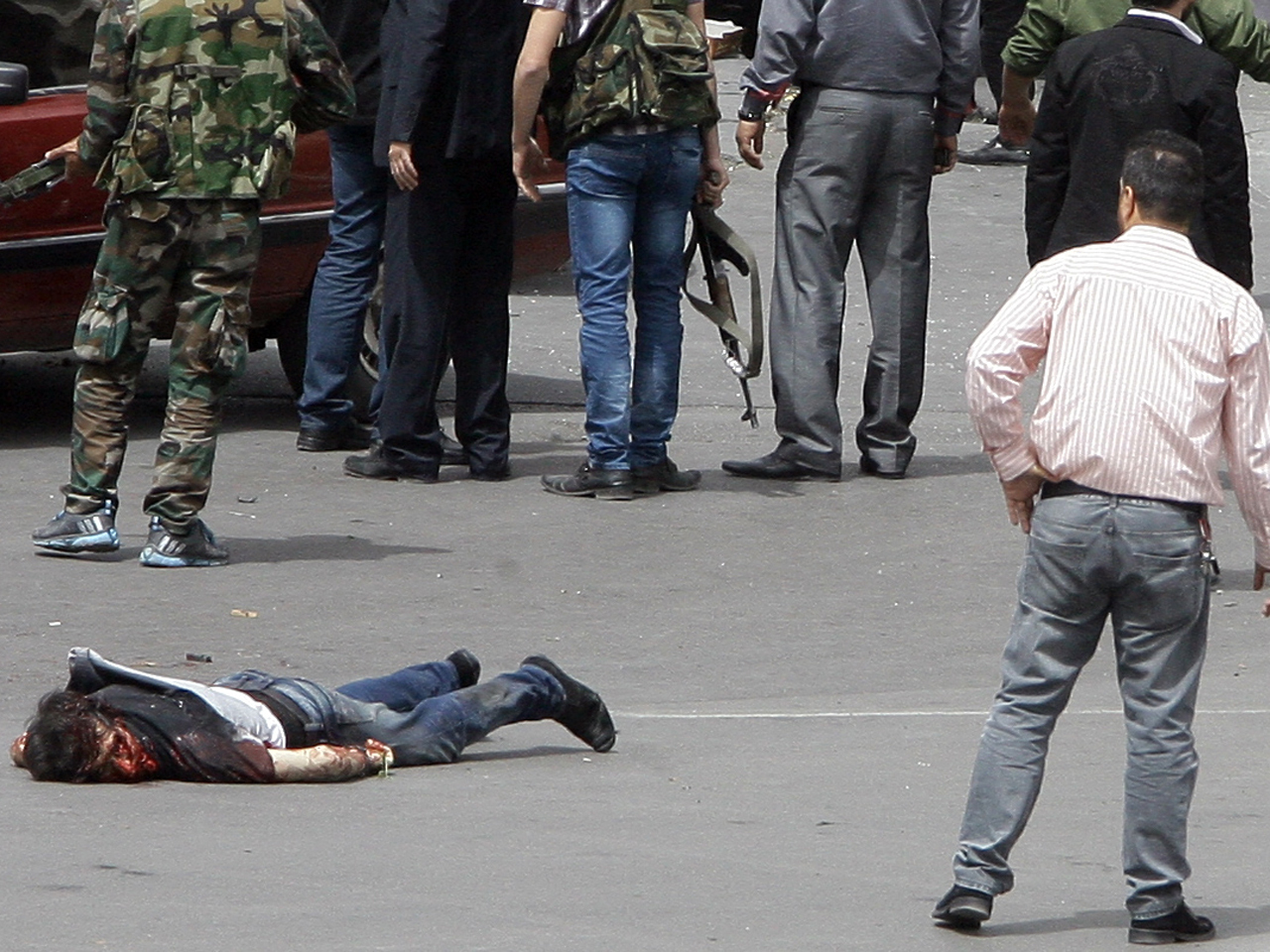 DAMASCUS, Syria A suicide bomber detonated a car packed with explosives on Monday in a busy residential and financial district of central Damascus, killing at least 15 people, setting cars and buildings on fire and sending plumes of black smoke over the capital, Syrian state-run media said.

The explosion came as U.N. chief Ban Ki-moon said inspectors were ready to deploy to Syria within 24 hours to investigate reports of chemical weapon attacks, but have not yet received permission from President Bashar Assad's government.

The blast, described by state-run Syrian TV as a terrorist suicide bombing, occurred near Sabaa Bahrat Square, one of the capital's biggest roundabouts. The Syrian central bank, the Finance Ministry and state-run investment agency, a mosque and a school are located nearby.

The explosion also wounded at least 53 people, according to Syrian state TV.

It was the latest in a series of car bombs and suicide bombings to hit the Syrian capital in recent months. The two-year civil war, which the U.N. says has killed more than 70,000 people, has become increasingly chaotic as rebels press closer to Assad's seat of power in Damascus after seizing large areas in northern and eastern parts of the country.

TV images showed thick black smoke billowing from a wide street with several cars on fire. At least six bodies were seen lying on the pavement. Paramedics carried a young woman lying on a stretcher, her face bloodied, into an ambulance.

Shaken teenage students holding their backpacks were seen walking away. The blast occurred some 20 meters (yards) from the Bukhari School.

Among the buildings damaged was the state-run Syrian Investment Agency. Several cars in the building's parking lot were set ablaze in the explosion. Witnesses said a suicide attacker tried to storm the building with his vehicle but was stopped by guards. He then detonated his explosives outside the building.

In the early days of the uprising, the Sabaa Bahrat Square was home to huge pro-regime demonstrations that took place with a giant poster of Assad hanging as a backdrop over the central bank building.

"I was in the square when I heard a strong explosion that threw me on the ground," civil servant Hussein Khalil, 32, told The Associated Press at the scene. "I ran and saw what happened."

Electrician Mohammed Ali Kheir, 21, said he was nearby and felt the pressure of the blast. "I immediately ran here and helped paramedics evacuate four wounded people," he said.

"Is this the freedom that Qatar and Saudi Arabia want?" asked the man, referring to the Gulf Arab countries that have backed Syrian rebels fighting to remove Assad from power.

In Syrian TV footage, one woman shouted sarcastically: "Thank you, Hamad!" She was referring to the emir of Qatar, a major rebel supporter. "Is this what you want?" she asked.

Assad's regime denies there is a popular uprising and refers to the rebels as "terrorists" and "mercenaries," allegedly backed by foreign powers trying to destabilize the country.

"This is the work of cowards," he said, vowing that the army would continue to crush all armed groups.

According to the TV footage, the dead included a young man whose face was blown off by the force of the blast. Shortly after, another man is seen covering the victim's head with his T-shirt.

Nearby, several men are seen twisting the wreckage of a car, trying to rescue a man who appears motionless in the back seat of a car.

Fire fighters struggled to extinguish flames that engulfed the two buildings near the site of the explosion as well as a row of cars near the roundabout.

The last large explosion in central Damascus was on Feb. 21, just a few blocks away from Monday's site, when a suicide car bombing near the ruling Baath Party headquarters killed 53 people and wounded more than 200, according to state media.

Anti-regime activists at the time put the death toll at 61, which would make it the deadliest bombing in the capital in the two-year Syrian civil war.

Last month, a suicide bomb ripped through a mosque in the heart of the capital, killing a top Sunni Muslim preacher and outspoken supporter of Assad and 41 others in one of the most stunning assassinations of the war.

There was no claim of responsibility for those two Damascus attacks and there was no immediate claim for Monday's blast.

In the past, Jabhat al-Nusra, an Islamic militant group with ties to al Qaeda that the U.S. has designated as a terrorist organization, has claimed responsibility for some of the deadliest suicide bombings targeting regime and military facilities across the country.

The violence has shattered the sense of normalcy that the Syrian regime has desperately tried to maintain in Damascus, a city that was until recently mostly insulated from the bloodshed and destruction that has left other urban centers in ruins.

The anti-Assad rebels launched an offensive on Damascus in July after a stunning bombing on a high-level government crisis meeting that killed four top regime officials, including Assad's brother-in-law and the defense minister. Following that attack, rebel groups that had established footholds in the suburbs pushed in, battling government forces for more than a week before being routed and swept out.

Since then, government warplanes have pounded opposition strongholds on the outskirts of the capital, and rebels have managed only small incursions on the city's southern and eastern sides. More recently, they have taken to firing deadly mortar shells deep into the capital as way to loosen the regime's grip on power.

Assad's government has asked the U.N. chief to investigate an alleged chemical weapons attack by rebels on March 19 on a village in northern Syria. Both the rebels and the regime traded blame for the alleged attack in the village of Khan al-Assal in the northern Aleppo province, which has not been confirmed.

Also Monday, a Syrian human rights group said nearly 9,000 Syrian government troops have been killed since the uprising started in March 2011. The Syria-based Violations Documentation Center, which tracks the dead, wounded and missing, said 8,785 Syrian troops have died in the fighting.

It said the rare report on the regime's death toll was compiled from government and opposition sources.

At the start of the revolt, authorities published names of the fallen troops daily. As the uprising turned more violent and eventually became a civil war, reports of casualties on the government side vanished from the public domain.